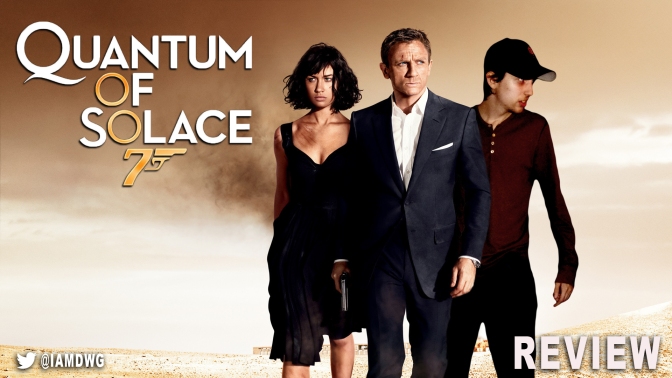 So yesterday, I wrote about Daniel Craig’s first 007 film,”Casino Royale“, which I thoroughly enjoyed. Two years after the first one was released, “Quantum of Solace” was released and I couldn’t have been more excited and more disappointed all at the same time even if I wanted to be. With “Skyfall” coming to theaters tomorrow I thought I would review both, and give both a fighting chance before I give the third one a try. [Side Note: I have no idea if I will actually see “Skyfall” in theaters or not…stay tuned].

As we last left Craig…Daniel Craig, he was sporting a three-piece suit and for the first time saying his signature greeting: “Bond, James Bond” before {Spoiler Alert: killing his last victim of the film}. As with last time, this film opens up with a heart-pounding action sequence, only no parkour boys hippity hoppiting on a crane. No, we start now with a car chase/shootout with plenty of interesting contorted faces. After the high-action scene, it moves right into the main story, which indeed takes place apparently minutes after the last film. The plot of this film revolves around James Bond avenging the death of his love from the last film (something pretty weird for a Bond film, but still believable.)

While he is trying to avenge her death, he comes into contact with members of an evil organization that claims to have people everywhere, forcing him to look over his shoulder at all times. He then meets our Bond Girl of the day, Camille (Olga Kurylenko). Last time, I mentioned a few obvious signs a girl will be a Bond girl, but I want to add one more…if a female interacts with Bond, she is a Bond girl. That doesn’t include M….ew

You will notice when watching this film that there is a LOT of action. Is that because the filmmakers just wanted to focus more on action this time around? Could be, but unlikely. My theory is that they instead wanted to avoid a whole lot of conversation. You see, this was written right before the 2007-2008 Writer’s Guild Strike, so the writing was a bit…sub-par and had to be filled in. There are not many phenomenal scripts out there with only one draft, so it wasn’t all it could be. Daniel Craig stepped up and helped fine-tune the script, but he’s only one guy, and not an experienced Bond screenwriter.

Unfortunately, all of the faults really do lie on the writing. You usually can count on a James Bond film to have some solid character development, in which this film barely had any of. Basically, here are the characters, accept that they are there and part of the movie. However, with no real character development comes no real attachment for the viewer to the movie, which results in boredom. No matter how action-packed the film is or is not.

What IS good about it is, that James Bond isn’t a socio-path that falls in love with one Bond girl, and the next film he has no recollection of their existence. No, one of the biggest parts of the film WAS about the first film’s Bond girl. I honestly loved the continuity aspect, it made it fresh once again for the series, but you can’t deny where it lacked elsewhere.

In the end, what this film had, was potential to be better. It was, however, rushed. Instead of pushing through the writer’s strike, they should have delayed the release to make the movie all it could be. Instead, it becomes so-so. Not completely terrible, no where near the first either. The main question now, is for “Skyfall“. I am wondering if they will keep any aspects of “Quantum of Solace” for the third sequel to the series.