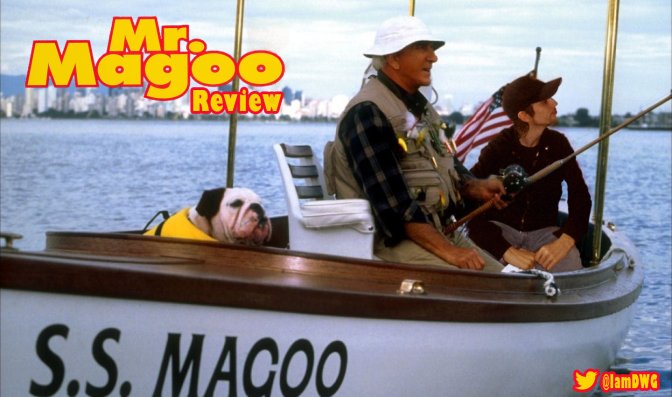 There is a genre of films that people often hate automatically. Those are the films that are based off of cartoons. This is generally due to the fact that people believe that cartoons should stay in cartoons, and live-action should stay live-action. I grew up as a kid in the 90’s, which is when a lot of these movies came out, so of course I am going to be partial here. This is the second time I have ever watched this flick, the first would have been the year it was released (1997), so here goes nothing with “Mr. Magoo”.

Like other movies based off of cartoons, this film opened up with a cartoon introduction that blends into live action. When jewel thieves steal a very valuable ruby, a millionaire named Mr. Magoo (Leslie Nielson) accidentally stumbles upon the stolen jewel when out on a fishing trip. So, the FBI clearly expect him of being the burglar. It is Mr. Magoo’s familiar bumbling antics that accidentally protect him and help solve the case.

Some family movies can be great, some can be crap, I really don’t think this deserves a lot of the hate it has received, but at the same time I also don’t think it deserves any love. There are some funny parts, but not as much as it shoots for, not for a long shot. There are some funny blind jokes, but plenty fall on muted laughs. The rest of the jokes try to play on an extreme amount of physical humor from Mr. Magoo, and a few stupid goons that try to copy the home alone goons at times. Finally, for some reason that I can’t place, the dog sounds like its barks are made by a human voice actor.

I know it’s supposed to be based off of a cartoon, but they focused too hard on making it a cartoon. There are things that work for a cartoon that just make watching it on live-action seem stupid. Most of the sound effects and even some of the music was a little much. What they needed to do, is stop trying to make it so much like a cartoon, and give it some actual seriousness when need be, too much of anything can be a bad thing. Too much comedy needs some seriousness, likewise  too much drama needs comedic sides, even if it’s dark humor. This film had too much of attempted humor, and in the end I think that worked against it.  Other than that, the film is only an hour and a half, but the pacing is really bad that that measly 90 minutes feels double.

I like Leslie Nielson, and honestly if anyone else would have played the part, it wouldn’t have been as memorable, even though it wasn’t really that memorable as is. I think he played the character itself pretty well, although some of the elements are lost with the live action, obviously. One major thing I can say about his character in general is he literally chuckles after everything that he says…it gets old. Even with that said, Leslie didn’t bring anything specifically unique to the character to be warranted any kind of sequel. The rest of the characters and actors were pretty forgettable. You may be interested to know, however, that this was one of Jennifer Garner’s first films

I do think it is fun for a one-time-only viewing. I never once had the overwhelming feeling to turn off the movie. Its good for families with kids, but I wouldn’t suggest buying it to add to your collection unless you particularly like to dust.