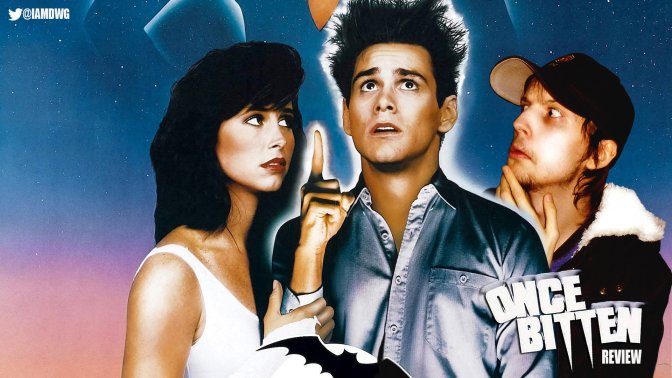 Everyone knows that vampire movies are the thing nowadays, or they have been in the last few years. In fact, it has gotten increasingly annoying with all of the TV shows and movies that have shown up, including all of the “Twilight” films, “True Blood“, “The Vampire Diaries“, a number of vampire parody films, and even last year’s “Hotel Transylvania“. Sure, a select few of the above-mentioned films and television shows were actually very well done, and I am a devoted fan of “True Blood“, but whenever I hear another vampire movie is being made, I feel an uncontrollable urge to roll my eyes. However, back in 1985, this fad had not started yet, so how did Jim Carrey’s vampire comedy “Once Bitten” hold up?

Mark Kendall (Jim Carrey) is a virgin, and apparently 18 years old. No matter how hard he tries, he can’t get his girlfriend Robin (Karen Kopins) to give in, not even after offering a ice cream truck as a romantic hot spot  So Mark and his two best friends set out to find more easy prey when Mark runs into the Countess (Lauren Hutton). The Countess is a 400 year-old vampire that strives to keep her youth, and in order to do so, must receive three blood transfusions from a virgin before Halloween night, and luckily for her, Mark was drunk and more than willing. So she drinks his blood, and Mark begins noticing signs that he is turning into a vampire. He won’t turn completely until the third transfusion…so will it happen? I guess you’ll have to watch to find out.

First of all, let’s talk about the plot. There is a character in the film that has a clear cut goal, and it is executed as it should be, but the problem was…the focus wasn’t on this character, it was on Jim Carrey’s character. That’s not ALL that bad, but he doesn’t really have a goal that he is personally trying to get. You would think – to stop becoming a vampire, but he doesn’t even know what is happening. You could say man vs. self, but that’s not really it either…he doesn’t really learn anything significant about himself either. You don’t usually see the goal of the film held by the villain while the hero just stumbles around with no real direction unless the focus is more on that said villain. In that regards, the direction was quite poor, even though it was a Jim Carrey movie.

Let’s talk about this for a second. This is one of Jim Carrey’s first solo films, and if he hadn’t claimed his fame on “In Living Color“, then I believe this movie could have put a dent on his future fame. Why? Because he wasn’t Jim Carrey. He was in a comedy, and he was the lead, but literally anyone else could have filled the role because there was nothing special about the role alone. I think Lauren Hutton did a fine job as the Countess, and when the two had a scene together, those were probably the best scenes in the film, especially the dance number about three-fourths in.

Now, onto the vampire factoids. Since when does a person slowly turn into a vampire like a werewolf in an old Michael J. Fox movie? If anyone knows anything about vampires, that doesn’t happen, never does. Here’s a quick tidbit how it happens – a bite to near death, bury them for a while (maybe with the original vampire), and they wake up a vampire, easy peasy. I know, I know…it is a comedy, it doesn’t have to be perfect, so I don’t take off too terribly much for that, but it did really irk me.

So, I can’t believe that I am about to say this, but ALMOST every “Twilight” movie is better than this, excluding the first movie (in my opinion).