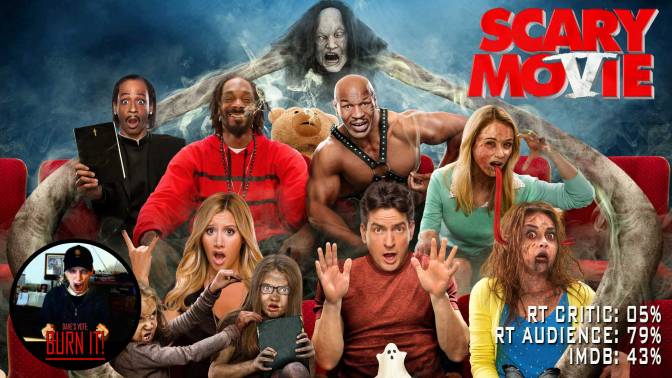 There is one main movie getting parodied in Scary Movie 5, and the main characters have their own side stories, which parody other films as well. The main spoof is Paranormal Activity, Dan’s side-story is a spoof on Rise of the Planet of the Apes, and Jody’s side story is a spoof off of Black Swann. The other movies parodied in this movie are as follows: Mama, Evil Dead, The Cabin in the Woods, The Hunger Games, Fifty Shades of Grey, Madea, Inception, & Ted. Clearly, the writers of the series now still have not gotten a clue in the last seven years, the title of their movie is “Scary Movie”, as the Wayans mostly laid out in the first two movies, the spoofs were done on actual scary movies. Out of the 11 movies mentioned above, only three, maybe four are considered horror.

The primary choice was a good one, which isn’t always true for this series, but a better one would have been The Cabin in the Woods. The first Scary Movie film was spoofing off of…well…a spoof movie. Scream is technically making fun of scary movies as well, and that’s what made Scary Movie so funny to begin with. Now, the writers must not have caught this, but The Cabin in the Woods is the same exact deal…it makes fun of scary movies as well…that’s why they needed to use it. Evil Dead was also a very smart choice, given the fact that it’s still in theaters, and that it is horror (obviously). However, not all of the movies were spoofed enough, believe it or not, and others were given precedence…like The Planet of the Apes….

There is a checklist that is usually accompanied with any Scary Movie. This is just used to see how much it really feels like it belongs in the series’ family. First of all, there is usually very good set design, a very good score, and the acting usually isn’t so bad. No check. While the set designs are…okay in some areas, they just don’t match in others, and the music didn’t seem particularly special whatsoever. Next, usually they get special actors to make fun of themselves instead of using look-a-likes (for the most part). Half-check. Some lesser-known actors did it, and not very many of them. Instead, they did indeed to impersonations, no good. Next, no matter how bad the movie is, it still is usually pretty funny with one-liners. No check. Anna Farris is incredibly important to the story…no check. This movie is so boring and so disappointing, that it actually starts to tick you off, especially if you are a fan of the series. Out of four checks on the checklist, this movie made a half-check.

It just isn’t funny. It is more than boring, it is disappointing, even to people with no expectations for movies, and that’s major. To make things worse, they really did have seven years to come up with a better plan. Watch for popular horror films, and I mean popular ones. If you can’t find popular horror films, don’t just pick random movies. It’s called Scary Movie for a reason. Otherwise, we could just call it Movie.

Scary Movie 5 came to theaters on April 12, check it out if you really want to!