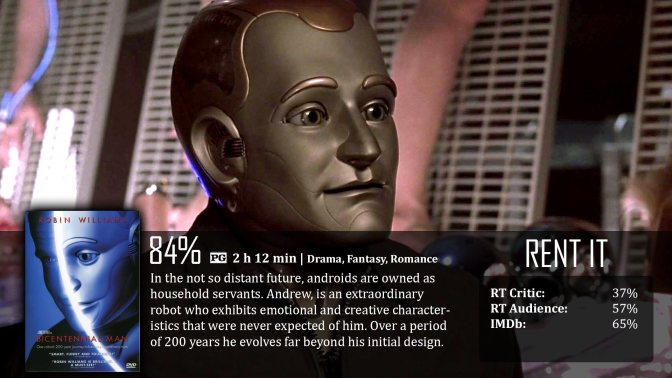 In 2004, Will Smith starred in a film based off an Isaac Asimov novel, entitled I, Robot. Five years prior, another Isaac Asimov novel received a film which also took place in the same universe as I, Robot. This film was Bicentennial Man starring Robin Williams. Other than an obvious difference in the visual effects budget, these two films really do have some noticeable similarities to each other, despite the fact that they are both very different than the original novels. The problem was that this film has received more or less a string of negative ratings. Where I normally understand the critic’s point of view, I have to say I’m at a loss with their viewpoint this time around.

Robin Williams stars in this film as an NDR robot, otherwise known as “Andrew”. Andrew was unboxed in 2005, and for the next two hundred years, we follow his unique life story. You see, Andrew had some kind of “malfunction” that allowed him to think on his own. To give you a brief outline of what the two-hundred years entails: Andrew is taught lessons, achieves legal freedom, travels the world in search of other special beings like himself, and when he begins to fall in love with the great granddaughter of his original master, he decides to become a real boy. Step by step, he begins to enter society as what appears to be a real flesh-and-bone man.

Bicentennial Man is quite a heartwarming tale with political messages throughout. It is coming-of-age, but more along the lines of…coming-of-flesh. He is doing this not to learn a lesson in order to grow up, he is doing all of this for acceptance, for recognition. Anyone watching this and paying attention will recognize the underlying messages about slavery, racism, civil rights, and the extreme advancements in modern technology. Each of these categories tend to have a subcategory in this film, and it’s quite an interesting venture to watch the film flesh everything out. It says everything that it needs to in an interesting way, and Robin Williams does a fantastic job, as usual, in portraying such a memorable character.

Anyone that knows me knows I’m not a big fan of coming-of-age films, but something remarkable happens when a coming-of-age film has a side story that can be considered plot…I begin to like it. Bicentennial Man definitely had a plot, which gave the film and the characters in the film a purpose to exist, which gave us a reason to watch the film and care about the characters. I honestly think that there is a special quality to this movie. I haven’t watched it so many times because it is lengthy, and you are going to realize this while watching. Hopefully, you’ll love the characters and story enough to barely realize the length.

As an Isaac Asmiov science-fiction flick, this doesn’t exactly measure up to say, I, Robot, because in the long run, it really doesn’t scream science-fiction. It feels like a really interesting and modern-day romance instead. Asimov is a famous sci-fi author, so in that regard, I can see why some people may not like it, but if you just watched it for what it was, you might find yourself loving it. No, the clothing styles made no sense with everything else, and technically there should be more electronic equipment laying all over the place instead of wooden clocks, but what can I say? The movie did not focus as much on a technical level as it did an emotional level.

The biggest problem I have found with this film is that it probably won’t be translating well to a modern audience. People expect things out of a science-fiction robot story, and honestly this film doesn’t deliver in that department. It has a lot of heart, and loveable characters, but it isn’t sure what genre it fits into, which is pretty important when promoting it to a target audience.