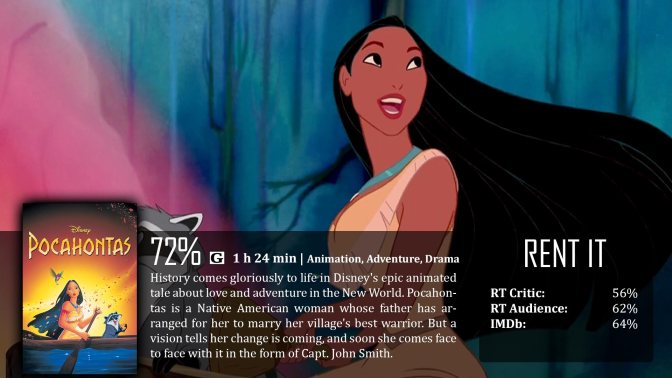 Ahh…classic Disney. When I say classic Disney, I mean more along the lines of the Disney Renaissance period…or more commonly known as ‘90s Disney. Those were the days. I personally grew up on practically every single Disney movie that was ever released during this period because I was born right when it began. Though, believe it or not, some of these films are actually strange in a matter of speaking. Pocahontas is one of those more classic movies due to its incredible soundtrack, but after I watched it again, I was actually surprised to find how kid-friendly the movie isn’t. Then again…this was the time period where a lot of subliminal messaging was done without kids’ knowledge. Is Pocahontas any different though?

Pocahontas is Disney’s first attempt at telling a true story, but we’ll just call it loosely based on a true story (because other than a couple key moments, the rest of the film is just blatantly made up). So Pocahontas is basically this lovely Native American girl who is scheduled to get married to a strong leader in the tribe, but she doesn’t want to you see…that’s when English settlers find their land, looking for gold and places to build cities in. The Indians hate the settlers, and the settlers hate the Indians, or savages as they like to call them. There’s a war going on, but Pocahontas and English settler John Smith can’t seem to get their hands off of each other. Sneaking out each night to be with each other and all.

First things first. This is a ‘90s Disney flick, so the target audience is clearly children. Check. Although, it may start to become a hassle when trying to determine what part of the movie is actually kid-friendly. Here’s what I discovered: Kids will love the funny animals doing funny things, kids will love the weeping willow tree that humorously talks, and kids will love and remember the songs in the movie for the rest of their life. What does that leave you with? Main characters, themes, and story…the most important parts of the film by far.

The romance in this movie is one of the most mature relationships I have ever seen on Disney. They are both adults, and they are making informed decisions to leave their area of comfort to be with each other, to understand each other despite their questionable customs and history…sneaking out…being with each other…it’s actually pretty serious. Sure they’ve had other Disney movies where older characters fall in love, but this is different, the moments they are together, you can sense the passion and love in each other’s eyes. Granted, that’s awesome that the graphic designers were actually able to pull that off, but that doesn’t mean diddly squat to kids. Furthermore, the relationship itself is very much like that of Romeo and Juliet, two star-crossed lovers…both alike in dignity, and their families hate each other.

Next…this movie is dark. There is killing, there is a scary and menacing villain. He isn’t a monster, he isn’t a giant bug, he is simply a man that exhibits every sign of greed. How they are able to present greed as an evil entity in this film was excellent. Yes, important to kids as well. But again…they are simply going to be too distracted by the funny characters and memorable songs. The themes in this film are clearly about racism in general as well as dealing with interracial relationships, which were more of a thing in the ‘90s then they are now, granted. Maybe kids were able to understand that better and learn something from it then, but I really doubt they would now…which is technically a good thing. We don’t want kids to have to rely on a Disney movie to be considerate to others.

Overall, this film is nostalgic to the ‘90s kid, held amazing songs that are still loved today, and a serious look into relationships. I think in the long run, kids will definitely like it, but maybe not for the reasons the film intended. Take that as you will.