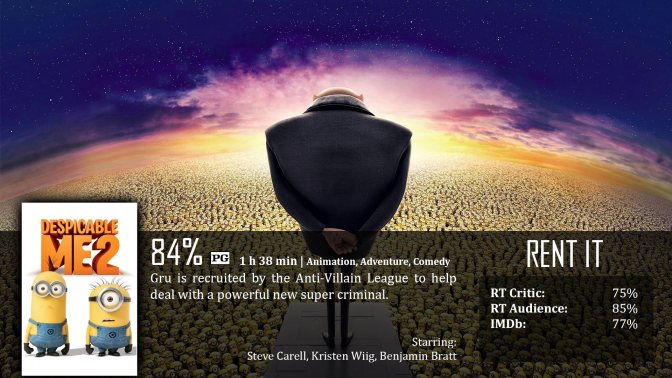 Sometimes you really want a sequel, sometimes you really don’t want one and get one anyway, and sometimes you don’t really understand why it was made other than popularity. Despicable Me was a great film with some amazing storylines and messages, but it kind of worked as a one-time thing. We had a bad guy turn over a new leaf through the love of three little girls that he had adopted. It was a…happier ever after ending, so how would they further the story? It definitely wasn’t really needed. However…those minions. Those blasted minions that kids everywhere adore made the popularity of the film soar, and here we are at Despicable Me 2. I didn’t know how it would turn out, but it turned out pretty well overall.

So where is good ol’ Gru now that he’s given up his life of crime? Clearly, he’s busy being a dad and doing everything for his girls. However, when a science lab is stolen and a secret formula is weaponized, Gru is called in by the “Anti Villain League” to help find the man or woman responsible and put an end to the madness. Meanwhile romance is in the air for both Gru and Margo. Gru has been going on dates recently, and Margo has just started showing interest in boys, which has got Gru increasingly worried.

So what’s good and what’s bad? It’s difficult to place, because the tone and feel is quite a bit different. Maybe that alone is enough for some people, but it’s not enough for me. I have to really dig deep into why I did or didn’t like it. I know for a fact I wasn’t really invested into the story, and I think I know why. The first film automatically felt classic and original in its storytelling. The story in this film is more or less a collection of things we’ve seen before. Bad guy consultant with the FBI to catch another bad guy. Romance, young love, yatta yatta, the point is that none of its really new.

The focus is also clearly on the characters. That doesn’t have to be a bad thing though, depending on the plot. So let’s recap on what the major plots are: Missing serum; Gru/Margo looking for love; and a mysterious man controlling everything from some unknown location. First thing you should know is that it’s all predictable, all of it. However predictable it is, the missing serum plot should have gotten the most focus, but because the movie was so focused on the characters and yes, even the minions, that storyline comes across as virtually nothing; even unimportant.

All of that is unfortunate, but the characters are really what gives this film its heart. As with the first film, the theme of this film has a lot to do with the bond between father/daughter(s). Unfortunately, it also has to do a lot with minions hitting each other and singing songs in their silly little voices. I don’t hate the minions, I think they help things out overall, but I do believe that too much is too much. I know little kids like them, but a movie needs a lot of focus on storytelling, not cute little alien banana monsters. I did hear at one point that after Despicable Me 2 comes a minion movie. God help us all.

Despicable Me 2 isn’t as great as the first, but it still has some good messages to tell, and it has a good amount of laughs in store for the little ones as well as hidden jokes meant for those adults in the audience.