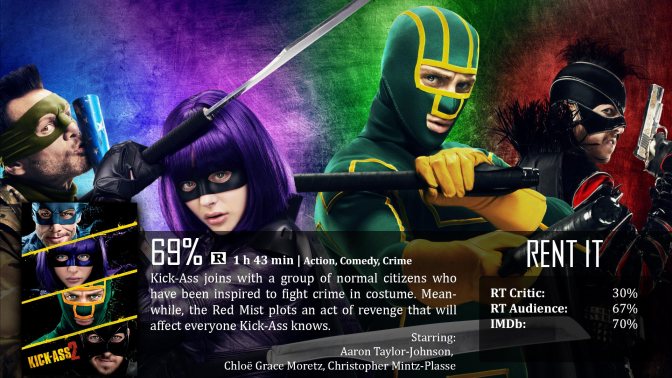 I like parodies and I like superhero flicks, and when the two come together, I’m willing to see the final product. When I first saw Kick-Ass, I was surprised at how the filmmakers were able to hone in that real parody feel while still keeping together an overall strong and simple storyline that even if you don’t like, can respect it for. In a way, it was original, and it was popular enough to gain a sequel. Then, I heard Jim Carrey would be in the film and I was game. Kick-Ass 2 kind of lost track of the message that the first one tried so hard to get across. Everything changed here. Was it for the better, or was it for the worst?

Let’s see here – if you recall, Kick-Ass is the alias hero name of the non-powered Dave Lizewski. His one unique attribute is the non-ability to feel anything, thanks to some messed up nerve endings. Anyway, his existence has spawned the interest of other regular people to gain the courage to become heroes as well. So while Kick-Ass joins a team of other heroes headed by Colonel Stars and Stripes (Jim Carrey), Hit Girl goes to high school and learns how to be a hero without hiding behind a suit. Meanwhile, Chris D’Amico becomes a super villain by a name I won’t even begin to state here…basically, he hates Kick-Ass for killing his father, and he’s out for revenge, on everything his foe dearly loves.

I don’t even know where to begin with this review – because I’m a bit confused at what happened to the story. Whatever it is doesn’t seem to link up with the first film very well. The first was a very basic, yet funny plot where both the villain and hero have a solid goal. This time, our heroes have fallen victim to a coming-of-age tale while our villain has the most cliché revenge plot of all time…I’m lost. I mean, the whole idea of a parody seemed to have been lost as they tried to make the film just a little bit more serious in regards to its general message. Yes, it still tried to crack jokes, just not in the same “inside-joke” manner that the first flick did a good job with.

Chloë Grace Moretz stole the show, I will admit. Aaron Taylor-Johnson as Kick-Ass can kiss my…well you know. I wasn’t connecting with his character on any level this time, but I can respect her side story. It had to do with self-discovery and separate meanings behind the term, “hero”. That’s deep stuff, even though this film series began with more or less, a parody. The problem with her side-story is that it doesn’t have a tremendous amount of focus, and either does any other side-story, really. In my honest opinion…it’s kind of all over the place. It’s not only all over the place…but it’s also senseless.

There are some deaths in this flick that really didn’t need to happen. I was disappointed more than once while watching this film. Not because of deaths, but because of how scenes were handled. It almost seemed disrespectful. Someone somewhere lost the vision that the first one set, and that’s unfortunate.

As always, the whole thing wasn’t bad. There were jokes here and there that did the trick, and the action scenes were off the charts, but as I’m sure you know, just two ingredients won’t do the trick. Everything else has to work…and I’m sorry but it doesn’t work out perfectly here.

In a way, Kick-Ass 2 improved on its action sequences, but lost the key ingredient that made its predecessor successful: a simple, relatable plot.