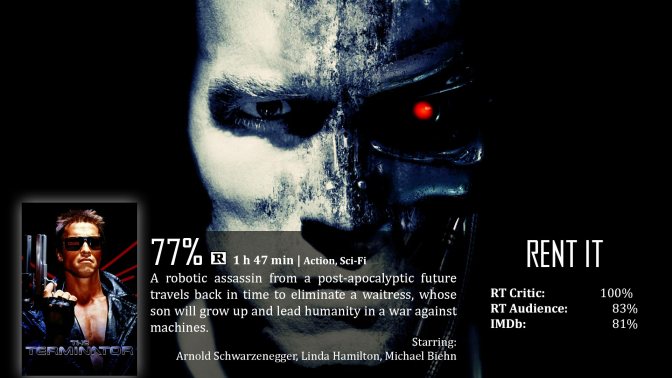 I love it when I run into a movie that I can use as a sample of something that doesn’t translate very well for a common audience. Something that when it came out was…huge…but for some reason or other lost some of its oomph as time passed by. The Terminator clearly had its positives if you’re in tune with production and originality for that time period, but not everyone pays that close of attention. We have expectations here in 2013, and sometimes, older movies just don’t translate well anymore. Unfortunately, The Terminator matches that description.

If for some reason you have been hiding under a rock for the past…almost 30 years, the plot goes a little something like this: In the year 1984, a cybernetic organism and human man travel back in time from something like…40 years in the future – where these machines started thinking on their own and attacking humans. The one person that stood against the terminators, winning the war was John Connor. However, the machines didn’t want to die out, so they sent one of their warriors (Arnold S.) back in time to kill John Connor before he is born via his mother. Only…all he had was a name to go off…no image or address, just city and year. So while he is off going from Sarah Connor to Sarah Connor in the phone book, killing off everybody in-between, the human man – by the name of Kyle Reese – is sent to do the opposite…protect Connor at all costs.

Before we talk about where this film fails nowadays, let’s talk about stuff that shouldn’t be overlooked. In 1984, we were introduced to Schwarzenegger…pretty much right here. He was the perfect casted man to play a death machine, because he looked the part…and sounded weird. I would totally buy that somehow they casted a robot of sorts. Also, originality seeps from every pore in this film, but only for the time period. I’ll get to that in a second. This film clearly had a great message on good and bad, while somehow making it a satire on machines without even knowing that’s what they were doing. When I watched this film the first time around, I really didn’t like it, but I can respect it a lot more now. In 1984, The Terminator was absolutely mind-blowing and epic.

Here’s my main argument, in 1984 this film was mind-blowing and epic. In 2013, if you’ve never seen the movie, you won’t be that impressed. Half of that reason is because of the sequel. When I review the next film, you’ll probably notice a bit more praise. I think overall, the second film is considered the best out of the franchise, and I agree. This is really unfortunate, but most people will compare this film to the second, because more people now have probably seen the second. It’s more memorable, it’s funnier, it’s really the preferred film. Because of that, The Terminator somehow feels inferior and…well…lame.

Throughout half of the film, well…actually more than half the film, the Terminator walks around in the stupidest outfit. To give you a little visualization…it’s a really light-colored jacket that’s surprisingly too big for Schwarzenegger with a black t-shirt underneath with colorful zigzags as a graphic. He looked like he came right out of an old MTV music video…not a scary death machine. I guess that’s the ‘80s for you. This film is littered with ‘80s cheese. That works for some films, I think it just hurt this one. Video game-like music with big hair on people that are trying to stay hidden…I don’t know…

Also, I know I may be comparing this to the sequel myself, but there really isn’t any humor here. Yes, the second film has a lot, but here’s the thing. Every single film should have a little piece of every genre throughout. The second film had a lot, but even the scariest films out there have a little humor to lighten it up when it needed to be lightened up. Finally, the graphics in this film are visibly terrible. I don’t mean to spread hate for Terminator lovers out there, but a new audience is going to laugh. When he tears apart his skin to uncover the metallic skeleton underneath, his face changes dramatically on those close-up shots. It’s clearly fake rubber skin on an animatronic face. The same goes for the full robot at the end… that animation was so laughable and fake…it just took away from the danger element.

Like I said, I can respect The Terminator for its initial effect on the audience. I’m sure back in 1984, people were astonished. I review for an audience that’s never seen it before with 2013 expectations. Some movies translate well, some don’t. For the most part, this film is overlooked as audiences everywhere prefer the sequel.