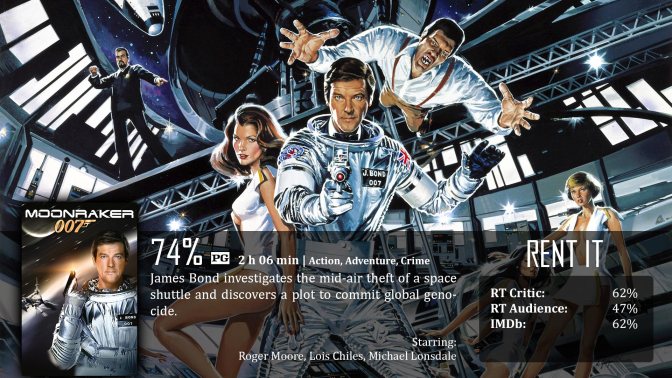 Well, I feel bad. I have probably let some of you down, but I actually liked Moonraker. I’ve heard all of these bad things about it, and how it strays from the spirit of who James Bond is, and maybe that’s true, but my style of reviewing is done a little differently. For the most part, my score closely resembles how I feel about a movie in general…but different things are considered for how I feel about a film too. The James Bond spirit always apparently comes into play in my reviews, and for some reason, I just didn’t care when it came to Moonraker. I was engaged to the flick as I watched it…I actually cared about a lot of what was going on in the film. That surprised me.

So, the story goes a little something like this…this short bearded fellow by the name of Drax is very rich and he makes space shuttles. When one of his space shuttles, Moonraker goes missing, James Bond is called into action, finding out the plane transporting the shuttle lost the ship mid-flight as the pilots flew it right off the back of the airplane. Apparently, Drax was behind the whole thing, and he continues to try to have Bond killed, obviously unsuccessfully. The reason he stole his own shuttle is kind of confusing, and kind of a plot device, but he was sending a bunch of shuttles into space filled with beautiful young people so he can re-populate the world after he kills every living human on the planet with selective nerve gas canisters. What must Bond do? Travel into space to stop him…but somewhere in the shadows, a past foe, Jaws, lurks – gearing for revenge.

Is this plot nutty as a professor? Oh, without a doubt, especially when a platoon of space astronauts battle the evil Drax astronauts with a bunch of laser guns, but you know what? I liked it for whatever reason. Heck, I was under the impression that the whole thing was going to be Bond in space, but that wasn’t the case…the stuff in space was only the final half hour or so. The rest of it felt like James Bond material give or take, and the locations were stunning most of the time. I mean, the locations are always great, don’t get me wrong, but for some reason or another, I seemed to notice them more this time around.

Any 007 film should have an intro action sequence that turns into an artsy theme song, spy gear, Bond girls, and a memorable villain and chase scenes to heighten the level of entertainment. This film delivered on all of those aspects, so yeah…this film did give the James Bond spirit when it needed to. I didn’t feel as though the stuff in space was necessary, because James Bond doesn’t belong in outer space, but given the scenes we had, it was still fun. Not only that, but a lot of the stuff in this film was more memorable to me then pretty much any of the Roger Moore stuff to date.

The film started off with a very well-shot intro action sequence between James Bond, Jaws, and an awesome sky-diving scene. Jaws’ return itself was also better, in my opinion, than his introduction in the previous film. His character had more to offer, and we like him more. Before, I was too focused on his “grill” than anything else, but his character was more developed, and the strange romance subplot for Jaws was admirable, giving his character retribution. The G-Force simulator scene was as tense as it was memorable, the fight on top of the gondolas was beautiful and again, memorable, and of course everything in space I won’t soon forget. There was also a light message of what true beauty means, even if it was really watered down.

I was engaged while watching Moonraker, even though I was already set on disliking it. For the most part, when I expect to dislike a film, that’s exactly what happens, but I’m always happy to be proven wrong. Yes, I don’t share this opinion with a lot of Bond films, but I was actually entertained with the flick, and I wouldn’t mind watching it again.