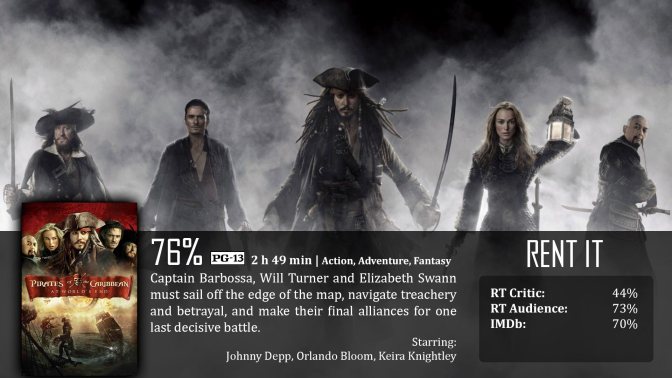 Before Pirates of the Caribbean went on to make that film – On Stranger Tides, the first three Pirates films were typically seen as this complete trilogy all on its own…then of course…the public just needed more Johnny Depp as Jack Sparrow in the end. As far as the first three films go, I remember the first and second film so incredibly well, but when it comes to At World’s End, I’m a lost boy. I remembered the following: multiple Jacks, flipping a boat, and the end of the movie. Having watched it again I can see why…nothing else is memorable, even though it’s the longest film in the bunch.

The story, as confusing as it is, has to do with the gang going to the ends of the earth, literally, to save Jack from pretty much Purgatory. In Purgatory, Jack has lost his mind, and to pass the time he has created about a thousand other versions of himself. So the gang go to the South China Sea to speak to a Pirate lord about rescuing Jack. The only reason they apparently want to do such, is because Jack never claimed a successor for his role as pirate lord. So they get him, and then there’s a lot of confusing stuff between the Chinese, the British, the Black Pearl, and Davy Jones. Once it gets past that garbage, it returns to the plot you were waiting for, the stuff introduced in Dead Man’s Chest – with Will wanting to save his father and all.

Okay, so the first thing I want to point out is that the movie, for the first real time, feels incredibly dragged out. They wanted an epic conclusion, and by the end that’s what they got, but in the meantime, holy moly is that a lot of filler. Halfway through, after they freed Jack that whole business with the British and the Chinese and the arguing was completely lost on me. I was straining hard to figure out what they were saying and who had what goal, and heck, what the movie was even about at this point, and this is the point where the movie completely lost me. Sure, it had something to do with the British having Davy Jones’s heart, and was controlling him like that, but then again…Davy Jones apparently had the heart now and was…what…working with the British. Everything is so jumbled here. There are too many storylines going on. You can’t just introduce a whole other group of pirates, you can’t! Four groups, and you’re supposed to keep track of what’s happening? No!

Get this, you don’t even really need to know what’s going on. By the end, when the film hits that climax and the really long epic battle starts out. You realize something. The movie could have been – freeing Jack and going straight to the end battle and the second and third film together would have made even more sense…and they wouldn’t have to waste any time with filler material that’s ultimately confusing. They certainly never needed the Chinese. There was some cool imagery in China, no doubt, but ultimately…who cares? The most important parts of what happens in this film is all in the first half hour and last hour. That’s an hour and half – a solid length for a film. But no, this is Pirates, let’s drag it out another hour.

Also, apparently, everyone’s love for Jack Sparrow has hit an all-time high, as one Jack isn’t enough for this film. He had to hallucinate multiple versions of himself. Part of me thinks it was necessary, because the film is darker, and it needed that comedic element to balance it out, but I think they did it one too many times, and it started to feel gimmicky. Plus, I don’t remember this happening in On Stranger Tides. This film made it seem like Jack’s mind had been altered ever since Purgatory…well I guess not permanently. It has been a while since I saw the fourth one though…maybe I missed or forgot something. Interestingly enough, as far as stories go, I think this may be the worst one just because it added too much which made everything confusing. I’m not a fan of the fourth one due to characters, but I might have At World’s End rated the least. Interesting.