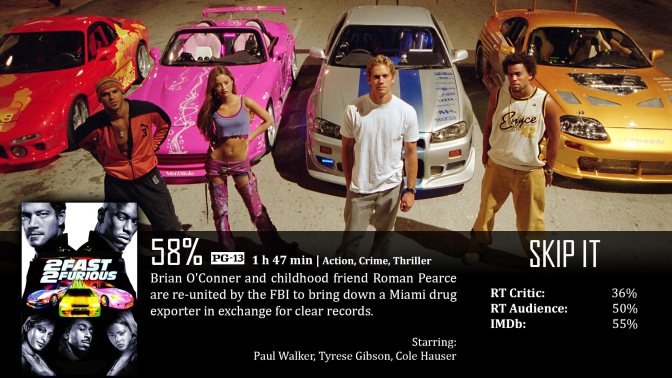 Dave’s 3-Word Review:
Not so furious.

I forgot to mention in my review of The Fast and the Furious about the order in which I am interested in this series. First and foremost, I want to watch them in order, because one…they seem to be connected in a way, and I wouldn’t want to miss something or get confused. Next, I want to see all of them, because I’m OCD about missing a film in a franchise. The first one I was interested in because that’s where the story started, I wasn’t so sure about the second film, and I definitely had, still have no interest in Tokyo Drift. I don’t even remember any advertising for the fourth film, but I know for a fact the fifth and sixth film are probably everyone’s favorite – so I am looking forward to those. Right now, I just finished up watching the second film aptly titled 2 Fast 2 Furious, and yeah, there were still things I liked, but man is it mostly just a disappointment.

The last time we saw Officer Brain O’Connor, he was aiding and abetting a known criminal before bailing himself, losing his position as police officer. Now, he’s in Miami doing the same exact thing he was before, street racing…just with a little extra knowledge left over from his glory days with Dominic’s team. When he is caught by the police, he is ordered…or…blackmailed into going undercover to stop a drug lord from smuggling cash across the border for said drugs. By doing so, he and his chosen co-driver would get their slates washed clean.  So he chooses an old mate from childhood named Roman Pearce (Tyrese Gibson), and then they get furious and do what they gotta do. Pretty much

Man, where’s Vin Diesel? You know as well as I do that Brian’s chosen co-driver should have been Dom. It only makes the most sense, he is choosing someone with a record that would get his slate washed clean, and he doesn’t even think for a second to bring in Dom? The two of them are like…perfect for the series, and he chooses this random guy that we’ve never seen or heard of before. Okay, so how does this blatant replacement fair? He does okay, but he’s no Vin Diesel. The only reason Diesel wasn’t in this film was because he was busy with xXx. All they had to do was wait. Unfortunately, the cast replacement wasn’t the only area this film faltered in.

The first film was partially great because of the form of crime that transpires. It was unlike anything you’ve seen before, a heist taking place while driving…gotta admit, that was pretty cool. In 2 Fast 2 Furious, we are stuck, forced to accept this pathetic plot of drug lords and cash smuggling. As if that wasn’t already the most cliché plot in the world. You ask me, and it had no place in this series. It needs a crime specifically centered on cars. Instead, it had a solution around cars, which doesn’t work quite as well.

I did, however, really like the fact that they kept that balance between the illegal street racing and their connection to the police. Somehow, they work so well as a counter-balance that I couldn’t really see this series doing anything else. Of course, I haven’t seen the others, so I can’t really say for them, but so far they have the right idea, and I just hope they don’t botch that up. There is plenty of direction this series can go if they keep the element of a police/criminal relationship intact.

Paul Walker’s presence definitely made this film a lot better than it could have been, which is part of the reason why I’m so worried about Tokyo Drift. Also, the relationship between the police and the street racers makes this film series feel special, and because it’s in both films now, you expect it to be in the rest of the series – in one form or the other.

The loose, tossed-together plot of a drug lord needing a driver to smuggle his cash across the border. Way too overdone, and it watered down how intense the first one was. Plus, there was a significant lack of action versus the original.

Roman: He did the stare and drive on you, didn’t he? He got that from me.