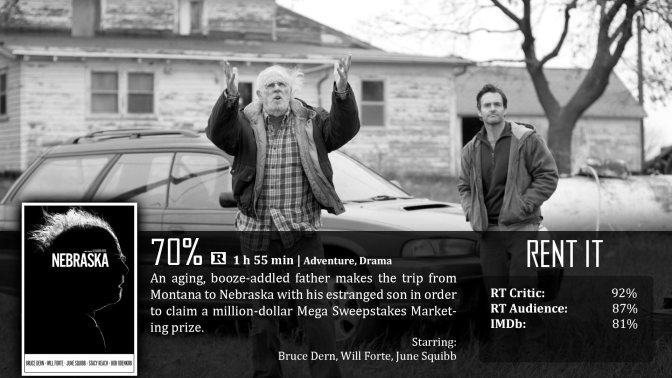 Most of the nominees for this year’s Oscars have really pissed me off. They took most of the films that came out during the last two months of the year and made those nomination-worthy…I’m sorry but no. I usually make a prediction post about the nominees, but I was so appalled at this year’s choices that I refuse to. One of the nominations for Best Picture and Best Actor, for example, is Nebraska, and I have to whole-heartedly disagree. I thought the movie overall was just okay, but primarily boring. I got the point, I understood the plot, the acting was okay, but that’s all I can say about it. I definitely won’t be watching this multiple times. I can say with certainty my first experience watching Nebraska will also be my last.

The plot of this film is very simple. It’s a road trip film about a father and son who travel together to Lincoln, Nebraska to collect $1,000,000. You see, Dave’s father Woody (Bruce Dern) got junk mail that we all get saying he won a million bucks, and he uses that as his sole motivator in life. He starts walking to Nebraska against the wishes of the police and his family. Dave (Will Forte) decides the best way to go about this is to drive him there – cue road trip adventures…or something.

Before you can say I am immature in my movie-watching experience, just try to remember I’ve reviewed over 800 films of all genres. I know what’s good, and I definitely know what’s bad. Nebraska isn’t bad, it’s just not great. What it is is somewhere in-between just okay and good. I’ll try to explain why. A movie’s initial goal should be to entertain. You want an audience to stay seated and experience the whole film, right? Right. Nebraska has really good acting (not phenomenal), and an intriguing premise, but it’s also mixed within an overdone theme (road trip) as well as cliché messages (family, friends, staying true to your dreams no matter how dumb they are to everyone else.) We’ve seen this stuff before, multiple times, so why is it such a big hit to everyone?

First of all, let’s take a look at the nominations it received. First, it is nominated as Best Picture – that basically means good all around (gonna have to call B.S. on that). More specifically, Bruce Dern was nominated for Best Actor. Okay, first of all, I just gotta say he snubbed Tom Hanks for a more deserving nomination. Second of all, he did okay here. I believed he was a crazy old geezer that isn’t thinking logically. Only problem is…I really didn’t care. I don’t know who Bruce Dern even is, so I can’t even say this is his best performance, all I can say is he did okay (not Oscar material). I will say, however, that he was incredibly boring! Will Forte did okay as a serious actor, but it felt too weird, the man was meant to crack jokes, you can tell.

Next, cinematography also got a nomination. Out of all of the nominations, this is the most deserving. I don’t fully understand why they decided to make this film black and white, but it does work…sometimes. Some of these shots looked absolutely stunning, and mirrored the quality of professional photography. Other shots not so much. The problem I had, once again, was yeah it looked good sometimes, but what really was the point? Was it because a majority of the actors on screen were old, and old people look better in black and white?

Of course, the film got a few other nominations which I think are okay nominations, but most of them I just don’t think deserved the praise. I believe this film is subpar. It has its moments, absolutely, but if I was rating this based solely on how it made me feel, it would have been in the 50-some percentile. I do, however, understand that it was done well on a professional level, therefore, it got an overall better score. But as for Oscar Nominations? Come on…

The decision to make Nebraska black and white was overall a good choice, because that added tone and depth to an overall bland film. Also, the premise was…interesting.

This film definitely didn’t deserve 5/6 nominations it received. The only one I thought was remotely deserving was cinematography.

Receptionist: Does he have Alzheimer’s?

David Grant: No, he just believes what people tell him.