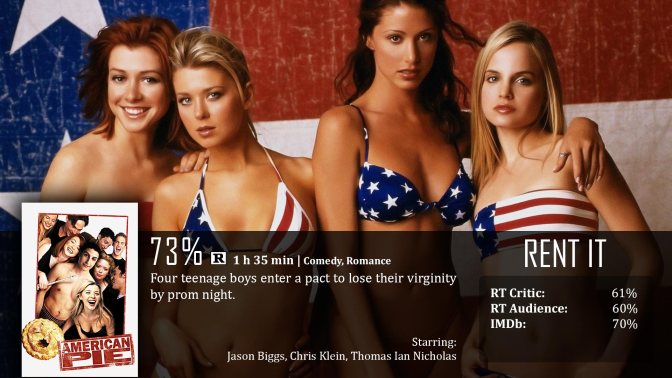 So, craziest thing happened. I got a job. Something I haven’t had in years, and today is my first day. The reason I mention it is because in sharp contrast to my mature, responsible decision – I have decided to watch the first irresponsible and immature movie that came to mind, American Pie. Keep in mind that I haven’t actually seen any of the movies in this series, including the numerous spin-off films. I may have seen a clip here or there on TV, but that’s about it. I’ve decided to watch the main series with the main cast only, which starts right here.

We have a pretty typical teenage-genre film here, as we are introduced to a number of friends still in High School. Their plan is pretty simple, to lose their virginity before the end of school, specifically speaking – prom night. Of course, their awkwardness and young people issues often get in the way, and as it is also a romance film – the message of love and “it isn’t always about sex” is clearly obstacles, but are they welcome obstacles is the question.

Growing up in a highly conservative home, it is these types of films I typically avoid reviewing. One, because they aren’t really my thing. Two, they’re all pretty much the same thing. And three, it’s awkward. For such a movie with a simple, perverted plot…it can seem really childish in nature. Like one of those movies you either see or you don’t and a review isn’t really necessary. On the other hand, this series alone is incredibly popular as far as comedies go, landing four movies with the same cast. I had to find out why. I think I may have a good grasp on it. The characters are so good.

Forget about the plot for a second. The characters of Jim, Oz, Michelle, Vicky, Finch, Stifler, and Heather are all so, so well-written as well as acted. So much that I welcome the context of the plot of sexual depravity. There’s no better source for awkward and embarrassing experiences than that of a bunch of high school kids acting like complete idiots in the name of sex. Admit it. We were all idiots in high school for different reasons, and this is a pretty popular one. I can’t say we don’t have any films on this subject, because they’re all over the place, but I’m not sure we really have one that is this good that it’s actually believable. That’s what gets me. It’s equal in being over-the-top and believable at the same exact time.

However, I do have to say that for a modern audience, there’s really not that much about this film that’s utterly unique. You can love these characters all you want, which is well-deserved, but the plot of the film is simply something we’ve seen a thousand times over, and don’t really care to see more of. American Pie may have revolutionized this genre and created hundreds of copycats, but for someone that has never seen it, like me, a lot of what it was blended with the rest, and that is a big problem.  In short, it doesn’t stand out as much as it probably should. At least not anymore if it did when it first came out.

The comedy, I should mention, still works most of the time. That also has to do with the characters and how well they are written. It’s just that these scenes are so embarrassing that you almost want to look away…and that means it did its job perfectly, because while you’re looking away…you’re laughing. I won’t sit here and say all of the jokes click, but there are some decent laugh-out-loud moments that caught me off guard. So there’s that.

The casting and characters of this film make it what it is. Their expressions lead to believable awkward and embarrassing situations that still make this film exceptionally comical.

Simply put, the plot blends in with hundreds of other copycats. Even if American Pie revolutionized the genre of teen comedy, the plot and concept alone has just been done way too many times.