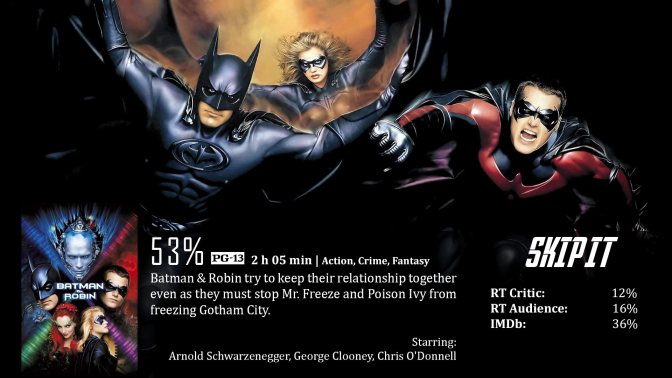 Dave’s 3-Word Review:
Parody of itself.

So that’s what they mean when people say something is a parody of itself. I’ve always found that phrase rather confusing, but yeah…Batman & Robin pretty much fits that description exactly. Funny enough, when I saw this in 1997, I didn’t understand what all the fuss was about, to me it was a fun movie…but thinking back to 1997, I was 9 years old. I’m not entirely sure if I’ve seen it more than once, but if I have it was probably in the following year…but that’s it. I can fully understand why a 9 or 10 year old might like the movie and think it’s a whole lot of fun…but as a movie that really should be epic…it is so, so lame.

The story this time is really jumbled, but try to bear with me. In Gotham City, a new villain has risen by the name of Mr. Freeze. His whole plan is to basically freeze stuff, make puns, and steal diamonds to save the life of his wife. Poison Ivy arises as well, and her plan…is to I don’t know, kill people by kissing them. Then a third villain comes out of nowhere by the name of Bane, whose basic plan is to follow around Poison Ivy and do what she wants. Then we have Batman and Robin. Robin is tired of Batman because his name is first in the title of the movie. Out of nowhere comes streetracer Barbara Wilson, who is related to Alfred – not Commissioner Gordon, and she decides later to just…become Batgirl because she can. Also, Bruce Wayne is busy working on a….telescope that can be used to spy on anyone in the world. Finally, Alfred is dying. Put that together…and there is your basic plot.

As I sit here with my jaw open…I have to ask myself what in the world I just watched. There’s almost nothing good I can say about this movie, so I’ll just start off with the positives. This is a very good kids movie. Kids everywhere will love it with all of the action, corny jokes, and gadgetry. It also has some worthwhile scenes with Alfred as he goes through stages of sickness. We have to cling to whatever gloominess is left in the series, and it is at least done pretty well in that sense. The same can almost be said about Mr. Freeze and the moments he thinks fondly of his wife that clings to life. That’s about it, though. The rest is absolute hogwash.

The story is all over the place, just read my plot description. I’m not purposefully trying to make it seem jumbled, it just is. The plot went literally nowhere. There were too many characters. I’ll usually complain when they have like three villains in a movie, because that alone is too much, but then you have Barbara show up as well…and her story was so stupid and pointless that I feel retarded even mentioning her character’s existence. But let’s forget the jumbled-up plot for a second, let’s just say it had a great story…what’s left? What’s left is the wretched writing.

There were three villains, and none of them had a cool origin, they were just rushed just to be in the thing, and then the puns. Oh my god. I’ve heard people make fun of Arnold for having so many puns in the movie, but I always thought they were over-exaggerating. There was no way he had that many puns right? I always thought – yeah he made some puns, but oh no, it was every single line. Puns are kinda goofy sometimes if you’re reading them, but as actual movie lines, it makes the movie overbearingly corny. He wasn’t the only one making bad jokes, Batman & Robin are just as guilty, as Batman whips out his Batman Forever Credit Card, which he never leaves home without. While I’m at it, why is Bane a retard?

There’s a lot of hate for Batman & Robin, but I have to say it’s a great movie for kids. Not so much for important messages, but just because it’s fun, there’s a lot of action, a lot of lame jokes kids like, ya know. Also, there’s some sweet moments between Alfred and Bruce.

This movie also has a lot of memorable quotes from Arnie, but I’ll have to go with a different one.

Mr. Freeze: I need to get more diamonds, from my hideout.

Poison Ivy: I can help you grab your rocks.