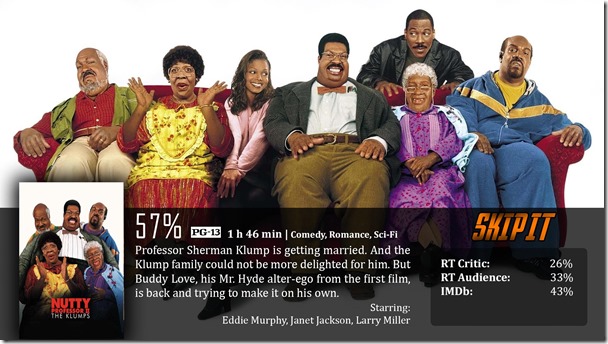 It was only a few days ago that I was talking about the rarity of comedy sequels, and whether or not that rarity was a good thing. We really don’t see many comedy sequels, and to be fair, it really should stay that way. As much as I love comedies and the characters they create, continuing the story is not always the best idea. The Nutty Professor, despite the flaws it has, still had a lot of funny moments and meaningful messages. The Nutty Professor II: The Klumps is a movie that I don’t quite understand. In 1996, Eddie Murphy dressing up as countless people is silly, sure, but did we really need a movie with more focus on the Klumps? I mean, they don’t even help the overall plot. Anyways, enough of my rant, let’s talk plot.

Professor Sherman Klump is back and fatter than ever. Okay, he’s equally as fat. Anyway, he’s onto a new invention, and instead of a reduction in weight, it’s a formula to reduce age. That’s right, a synthetic version of the fountain of youth. However, somewhere deep in the crevices of his DNA remains last remnants of Buddy Love…whose just itching to come back out. In fact, Buddy’s personality is escaping in Klumps own, and so he decides to extract it…which only makes things worse, because now there is a Buddy and Sherman in the same world. However, the split is having a negative impact on both of them – Sherman is losing his intelligence, while Buddy is gaining the abilities of a pooch.

I actually like the whole idea of Buddy Love physically escaping the Professor. Did they really need another Eddie Murphy in the movie? No, but I do love films that represent insecurities as physical representations, which is a rarity in film. I was somebody that actually liked the scene in Superman III that had Clark Kent face off against Superman. It symbolizes a metaphorical struggle within oneself, and to see that in film is always a good thing…in my opinion.  That alone I wasn’t angry about, I thought it was smart, instead I was angry at the use of the Klumps.

We get it, har har, you play several characters in your own family, and they’re all just rude and dysfunctional. That’s great, but when it comes down to it, there’s not a soul on earth that can’t see that they are simply comedic relief and have no right to be considered anything more. Trying to create multiple subplots just to have more of the family was a downright awful idea. When it comes right down to it, the story alone wasn’t bad, but it was absolutely ruined by a clump of Klump storylines that I couldn’t care less about. They don’t further the story, they water it down, and for that…I just can’t forgive the writers.

Past that, the messages were about the same things as the first…so there’s that. It was still about insecurities, but it wasn’t an insecurity that any audience member could really connect with unless they are schizophrenic. Seriously, the beginning of the movie had Professor Klump fighting voices in his head, which caused him to do things he didn’t want to do, then the story goes on to physically interpret multiple personalities disorder. I know that wasn’t the intention, really, but it’s hard not to think about. The execution was wrong, the use of the Klumps was too much, they went wrong in every which way…to the point where it was just……bleh

It’s cool to see Eddie Murphy jump back into his character and show off his unique sense of humor and acting range. The physical split in personality was also very smart – as it’s a symbolic representation of man vs. self.

The movie just isn’t any good. They took what should have been normally considered just comedic relief and turned it into mindless plot. Not only that, but the comedic relief wasn’t even that funny because, again, Tyler Perry ruined it for me.