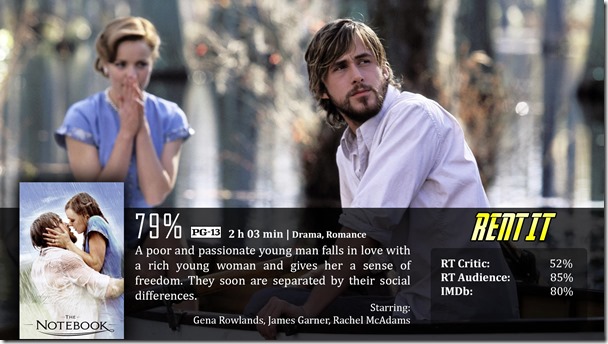 Chicks! Come, unite, and praise your false god, The Notebook. Yes, yes, it’s not that nuts, but girls everywhere absolutely cannot get enough of this movie. I’ve seen it before, it’s not horrible (like many guys would like to believe), but it’s also not as great as girls would like to believe either. It’s honestly somewhere in the middle. So I decided to sit back down and watch this movie that every guy clenches his teeth to get through, to decide what exactly it is that drives guys away and pulls girls in.

If you aren’t all that familiar with the story, it goes a little something like this: an old man is telling a love story to an old woman in a nursing home. The story is basically about this attractive guy (Ryan Gosling) and attractive girl (Rachel McAdams) falling desperately in love and experiencing together the ups, downs, and imperfections of love itself, becoming once again, a movie that defends the ever-popular theory that love conquers all. It’s sweet, it’s sad, it’s sappy, melodramatic, and pretty much the exact definition of a “chick flick”.

Great, now that that’s out of the way, why do guys hate it so much? The great thing about this answer is that…there’s so many different reasons for guys to hate this movie, and none of them are what girls think…which is basically – guys are just jealous because they’ll never measure up to the men in the film. No. The real reason for, I’m sure a lot of guys, is that it paints an improbable portrait of the perfect male body. Notice I didn’t say impossible – it’s definitely possible, but this film makes nearly every girl on the planet cry out with – “Why aren’t you like him!?”. Guys themselves don’t care if they measure up or don’t… because it’s just a movie. They just never like it when a third party tries to convince their girls that they aren’t good enough for them. In short – it’s irrational and annoying.

I personally don’t hate the movie, I actually like it…but I’m far from loving it. The main reasons that I dislike the film have to do with plot. Like I said, it really is the exact definition of “chick flick”. I’m not sure if they were trying to have a secret reveal throughout the movie, but to me it was predictable from the very moment it began…like I already knew absolutely everything that would happen. So it’s predictable, but it’s more than that. There’s no real goal. There sort of is with the old couple, as that’s the most interesting element, but I couldn’t care less for almost anything regarding the younger couple.

Okay, so why do girls love it? In short, it’s because of the emotional scenes. To branch that out a bit, it’s because, to be fair, they were really put together very well on a professional level. Whether girls realize it or not, they appreciate all of the hard work put into making an emotional scene perfect. The acting is remarkable, the lead-up is very realistic – as are the living and family conditions these people go through. Not only that, but the chemistry is completely on par. The message is loud and clear, and it is delivered with precision. I understand why girls cry…there are certainly tear-jerking moments throughout the film. However, as incredible as the acting and the emotions are displayed in the film, that is not enough for me to say that I love it.

Emotional scenes are great, but when a movie focuses more on that then anything else, we have a problem. I feel the same about movies more interested in visuals. It’s imbalanced, and to me, that’s a problem.

Girls can’t help but love the movie, because it’s the perfect go-to movie if they are in need of a cry session. The emotional scenes portrayed in The Notebook were clearly put together very, very well.

Guys, however, won’t really like it because it often has the tendency to color women’s perspective on who men are now versus who they think they should be. It is also an incredibly sappy and predictable story.