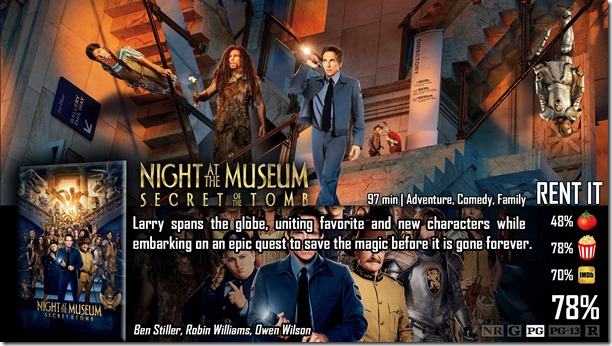 I’ve never been one to think the Night at the Museum franchise really needed to be a franchise at all, but I liked the characters enough to keep watching anyway. I remember the first time I saw the second film that I liked it, but the second viewing had me disappointed in a lot more than I liked to admit – and I came to realize something. There were very specific things left out of the second film that shouldn’t have been left out – and it was that reason alone that the sequel didn’t work all that well – and to my surprise and delight, Night at the Museum: Secret of the Tomb took those faults and responded in a very satisfactory manner.

Our third and final film in this trilogy is once again about the tablet of Ahkmenrah – as it has begun to rust up recently. As it slowly dies, those whom it gave life also begin acting irrationally, and it’s up to Larry Daley to head to a London museum to find answers on how to fix that. Meanwhile, Larry’s son, Nick – is deciding on whether or not he wants to go to college, and Larry must figure out how to teach his son some valuable lessons about the importance of education in the process of everything else.

This movie did it all, and in a way, was better than the original in parts, but nothing will ever beat the first – no worries. What I mean is that in the first movie, the whole magical museum bit was just a gimmick, and the real story was between father and son. This film had two main plots – the museum plot and father and son plot. In fact, they did so well with this movie, that you can completely ignore the second one as if it never existed. That’s awesome. The best part of the second movie was that it actually took place one night in a museum, as the title suggests – and as did this movie. Finally, the main characters that were unjustly ignored in the second film – were playing an even bigger part in this movie than they ever have been before. Technically speaking, they understood their flaws and they came back in a big way.

I just want to say that my biggest complaint about the second movie was the brutal ignorance of the father and son story which held the first movie together. In all honesty, that’s where the heart of the film truly lies. It’s what the movies are about, and it should have stayed that way. I loved that they not only went back to that in the third film, but paid a lot more attention to it, as the general theme of father/son poured from the pores of the film. There was the feeling of a fatherly figure with Robin Williams’ character. There was the father of Ahkmenrah and that whole familial story, and of course Larry and his own son. It was really perfect, and really heartwarming. However, their decision to change actors for the son has a special place in my Disappointment by Annoyance jar, I have to say.

People are going to be wondering about Robin Williams in one of his final farewell films, so I have to answer how he did. The answer to that is perfectly. This is a great send-off film for Williams, and it gave the actor serious respect after so many unfortunately bad movies from him. Seeing him in an inspirational role again is what I’ve needed for a while, and it was great to see. Out of the whole series, this was Robin’s best and most-active role…and he did great with it.

Other than that, I want to say there are very funny moments in this movie making it feel like one of the more successful comedies of the year. Not the best, no, but surprisingly funny in parts. I won’t ruin those moments for you, just know they are there. I do believe this movie is definitely better the second in every way – including comedically. The first will probably be unbeatable just because of the introductions to the characters and magic…but this is a lot better than I expected it to be.

Night at the Museum: Secret of the Tomb surpassed the failures of the second film by making a movie that returned to not only the magic of the museum, but the magic of family as well. It also did a wonderful job re-energizing the positive humor of the first and acting as a complete and successful comedy franchise. Also, at the London museum, it’s amazing to look at foreign art from around the world instead of the typical art pieces the audience will surely recognize, like the last two films.

One of the main things I didn’t like about this movie was a secondary ending that seemed to be added at the end just because Robin Williams died – and I’m pretty sure they reused footage of him from the first movie and edited it into the third…I get it, it’s for the kids, but the ending just before that was so perfect. I also didn’t like that they changed actors for the son – and not all of the jokes worked perfectly because they were ruined by trailers.