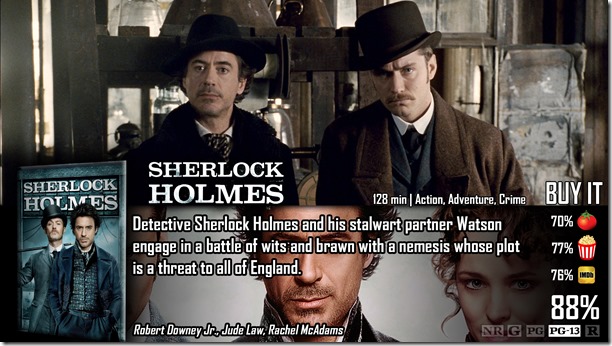 I’ve actually grown quite accustomed to the BBC’s popular program, Sherlock, and as such, I haven’t gone back to the film series that I always swore to – Robert Downey Jr.’s Sherlock Holmes. I can’t say I actually knew anything about the popular British detective back then, but there was a neat spin that Downey Jr. put on the character that I absolutely loved – but no one is a match for Benedict Cumberbatch…that being said there are a few coincidences in the first movie that I noticed this time around, thanks to the BBC show…and I just found that funny.

Anyways, Sherlock Holmes isn’t really based on any specific novel from the past, but rather a mash-up if you will of different stories combined into one – the same can be said about the sequel. This was to create a more…original stance on the character…and I think they did their job. Alrighty, so Lord Blackwood is basically an evil magician who appears to be the real deal – but Sherlock doesn’t buy it. Not even after Blackwood comes back from the dead. Dead or alive, Blackwood is intent on more or less making a violent political statement, and Sherlock Holmes and John Watson must stop him in his tracks.

What sold me on this series the first time around were two things – the action and humor. Both aren’t what I normally associated Sherlock Holmes with…instead what I associated him with was a really boring BBC drama that runs lengthy and is devoid of entertainment. Suddenly we have a detective that uses his deductive reasoning to find people’s weak spots and suddenly – he’s Bruce Lee. I’m a fan of martial arts in films, and there’s really nothing like how it was used in this film – it was quite simply…fun – and really smart. So far, RDJ still owns that aspect of Sherlock Holmes.

As for the humor, this is tricky. Both Sherlock Holmes and BBC’s Sherlock use a very similar approach to humor – but one isn’t accurate to Holmes, and that’s Robert Downey Jr.’s version. In Sherlock, Benedict Cumberbatch isn’t always trying to be funny, it’s honestly just his reactions to things that turn out to be funny anyways. Meanwhile, Robert Downey Jr. is mostly just playing himself again. So his character is trying to be funny – and it honestly is. It just depends on which version of Sherlock you prefer as far as the humor goes. Both are fine, one is more true to the original stories, one isn’t. Not that I really care.

The only thing that really sets me off a bit – is Robert Downey Jr. doing a British accent, which isn’t something I normally hear…and knowing its fake distracted me a bit from the overall performance. It’s not terrible, but it is unusual to say the least. Jude Law, on the other hand, seemed to be perfect as John Watson. His annoyance with his partner is apparent, but the love and loyalty for his partner always outweighs any doubt – which is perfect. As for Irene Adler – after seeing her character truly seductive in Sherlock, it’s hard for me to take Rachel McAdams’ sweet nature as anything similar – so her character is off…but again…it’s its own thing and it somehow works really well anyway.

As for some behind-the-scenes stuff, the movie looks and sounds nearly perfect. The visuals are just right to set the scene in the right era, and the music is one of the best parts of the franchise in general – I actually believe the producers of Sherlock borrowed some of the ideas for the music from this franchise to use in their show.

Say what you will about adaptations for Sherlock Holmes, if it works it works. Sherlock Holmes may miss some of the points in the original source material, but I think they did so on purpose because – what they have here is real entertainment that is both thrilling and hilarious at the same time – making a trip to see it an event worth your time.

Even though I don’t have anything against Robert Downey Jr., I do believe there could have been some smarter casting done for his character – the same can be said with Rachel McAdams. Then again, no one can really do humor like RDJ, and if it’s his style they wanted – then he was the right choice. Also – nothing will ever beat Benedict Cumberbatch’s Sherlock.