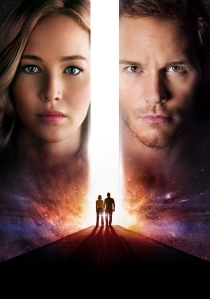 There isn’t a lot of 2016 films that I regret not seeing in the actual year other than Passengers. The first time I saw the trailer for this film, I knew I wanted to see it. It wasn’t really the science fiction, although that did look impressive, it was the basic concept of waking up alone, earlier than anyone else, and the potential found there. Of course, I was worried about the poor critiques the film has found, but I hoped that those critics were wrong, and it was as good as it looked. So really, how was it? Let’s get into it.

The spaceship, Starship Avalon, in its 120-year voyage to a distant colony planet known as the “Homestead Colony” and transporting 5,258 people has a malfunction in one of its sleep chambers. As a result one hibernation pod opens prematurely and the one person that awakes, Jim Preston (Chris Pratt) is stranded on the spaceship, still 90 years from his destination. – Written by Eirini (IMDb)

This category is all about the people in the film. This covers their acting ability, if the characters themselves are any good, if they work well together as a team, if they are deeper or flatter as characters, and if the casting director even did their job right. These are all very important issues to consider while reviewing film.

This category obviously covers the writing aspect of the critique. First, you want to know a little bit about the script. Specifically, how is the dialogue? Are they saying anything memorable or inspirational…or was it just bland conversation to keep the story going? How was the story itself? Was it well-balanced or over-convoluted? Was it original? Was it even interesting? Once again, all very important questions

Never forget that there are hard-working individuals working on this film day in and day out. It’s a great story, yes, but people helped make that possible. People like the directors, who have to take written word on a script, and somehow translate that for the big screen in a way an audience would understand. Editors, who are given a ton of material and expected to further make that idea and image the director has already – into a reality, like the director of photography, whose job is to make this movie look amazing…whether that means natural settings and landscapes, CGI, 3D, technical effects, or otherwise. The production crew, who are in charge of making advertisements that aren’t false, and don’t give too much away. Finally, the sound crew, who are in charge of everything the audio has – sound effects, sound editing, music, you name it. These are all puzzle pieces.

Have you ever been left wondering what it was about a film that felt…off, but you couldn’t place what it was? Well, a lot of people actually aren’t educated on the traditional narrative arc structure – which is seen in almost every movie or book story. With a missing piece, you might not understand what feels missing.

Here’s something most critics overlook, because they’re always so keyed in on critiquing the technical elements of a film. Well, that may be statistically accurate, but the numbers that are released aren’t always reflective of what we enjoyed about it…which is when we say the movie was under-appreciated or whatever. This category focuses on pure entertainment.

These are special questions written by you before seeing the movie, based on expectations, questions, stereotypes, you name it. If it’s a Tom Cruise movie, have Cruise-isms, if it’s a horror film, ask how scary it is, if it’s a sequel, ask if it fits in with the universe or if it was even needed to begin with, you catch the drift.

The first specialty question is a pretty obvious one. It’s a genre-specific question regarding science fiction and all that entails. Passengers is sci-fi through-and-through. They have space, the futuristic technology, the robots, the everything. Plus, even though it does feel like they borrow a few things from other projects, I can’t really say I’ve seen a science fiction movie specifically…that’s like this. The closest you get is probably RocketMan when Harland Williams wakes up on the spaceship early and eats all the spacemen’s food.

One of the instincts I got while watching not only the trailer, but most of the movie, is this sense of mystery. Why did this machinery break down? Why did it happen more than once? Throughout the movie, you start hearing the same old Titanic tale – it is impossible for the machines to malfunction, simply impossible. So in my thinking-too-deep head, I had to ask myself, well what if it wasn’t an accident? What if it was planned? What if they are all dreaming in the cryogenic tubes? Why!? I was probably over-thinking it all because the mystery that it sort of creates for itself…isn’t satisfying

In my opinion, this next specialty category should be an obvious one. Not only do the trailers sort of give that thought away, but in another sense…they are the last two people they’ll ever know in person ever again…you ask me, that’s a romance story waiting to happen. It’s no Nicholas Sparks story, but I think they worked pretty well together and I believed the romance in the film well enough to never question it.

Here’s a specialty category I once again figured would be happening all over the place, unpredictable surprises! That’s just the feeling it gave me. I still felt it early one when there was a surprise when it came to the inciting incident. So, yeah, like I said before, there are actually some decent surprises here and there, but because of it’s slight problem with originality, it also started to become predictable in way too many spots. Because of these two very different elements, I had to give this five stars only.

The final specialty question has to deal with the question on if this is halfway decent or not. Of course it is. NEXT!