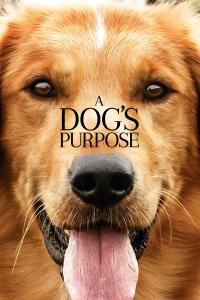 Have you ever wondered why dogs exist? Neither have I, but apparently a group of filmmakers had this thought and decided to make a movie off of it, but more importantly, A Dog’s Purpose has gained a lot of infamous attention for animal abuse. You see, TMZ released footage that supposedly came out during the production of the film that was filmed a year ago but just recently released around the time of release. Now, this triggered a lot of controversy around the film – to the point of critics downright boycotting the film without investigating the claims. It was proven that the video released was intentionally edited to mislead the public and no abuse actually took place. The damage was already done, though. A Dog’s Purpose already comes with the false history…so what did I think about it, knowing the claims are false? Let’s get into it.

A Dog’s Purpose centers around the life of a dog going through a few stages of reincarnation. He always wakes up as another dog, whether that be a male or female, whether that be a different breed of dog, and whether his/her owner is nice or mean, and throughout all of these experiences, we learn what this dog’s purpose is as a whole and its individual purpose with each owner…which I’m pretty sure is just to be man’s best friend…but what do I know?

Reincarnation is always a hard subject for pretty much any film because it can’t follow a very solid structure. It, by default, tosses the audience around, forcing them to get acquainted with a lot of different people…sometimes for no real reason other than to say…hey…reincarnation and stuff. What really happens when you have characters that are there to simply further the concept of reincarnation? You get owners that get close to dogs that end up dying. So yeah, the dog’s like…and I’m a puppy again! And then you have all these people who needed the closeness of a friend found in this dog…and then they lose it as soon as they get it…which is really depressing when you think about it. Why? Well, it’s mostly to tell the overall story of the dog…which means you toss people aside in the process to do so…okay then.

The one thing I can’t do…is spoil you on parts of the story that are really good, which are actually things I wanted to see happen, and it did…I just can’t tell you what those things are. Sigh. Sorry about that, but hey…I’m not spoiling you…so there.

Nitty gritty time! First up is the people in this film, which ironically has very little to do with “people” and more to do with dogs. That’s okay, I guess, as they are personified, I guess. The acting wasn’t bad, both in terms of voice acting, actual acting, and dog-training. The characters, in general, are memorable, but the casting isn’t.  Casting the dogs and people were fine, but I really wasn’t a fan of Josh Gad as the voice…he just irritated me, mostly. Enough to knock the points down a bit. Like I said earlier, there’s a lot of unimportant characters in this film that could’ve been skipped over, so very little importance. The chemistry with those pointless characters, as well as important characters, was totally fine though. Dogs are cute.

Next up is the writing score, which isn’t winning any awards from me, either. In general, reincarnation might be an interesting topic, which is why I gave that full points, but everything else was mostly lacking. The dialogue was mostly cutesy stuff that you’d expect a dog to think for being a cute dog, and that’s it. It’s not balanced at all though, this is a naturally over-convoluted story because it had to be in order to be a reincarnation tale. What about the story? What story? I guess there’s a nice little story about being a loving pup that makes everyone smile, which is somewhat nice to see, but other than that…nothing. It’s not even all that original because I remember seeing a reincarnated dog story before, and one that I prefer over this…so there’s that.

Next up, another mostly mediocre category. The only thing that really gets points here is the advertisement, as it was as advertised, so no false advertising. Everything else here was mostly typical and nothing stood out. The visuals, I mean it’s a cute dog and that’s about it. The directing and editing? No challenges there that stand out at all. Finally, I didn’t notice anything musicwise that was all that memorable or standing out.

Even the narrative arc, the easiest category to perfect, could only get a six. The introduction was fine, as it introduced us to the idea of reincarnation and a cast of characters that we all can love and appreciate it. The inciting incident? Maybe it’s when he reincarnates again, but I’d rather point out it happens all the time, which feels more like an obstacle than anything, but even then, it’s not clear. That’s why I gave the incident zero and obstacles one. The climax was fine, and the falling action was pretty short…but…it’s okay.

Entertainment, as always, is the most difficult category to win points with, which is mostly why it got the score it did. I consider this a “maybe” for how rewatchable it is. I’d watch it if it came upon me on TV. I think parts of it are fun, which also goes into sucking the audience in in parts, but that’s it. There is no impulse to talk about it or buy it, period.

Alright, so the first specialty category is that spoiler I was talking about before. I can’t tell you the thing I wanted to see, only that it partly happens, partly doesn’t. If you really wanna know, email me, dave@daveexaminesmovies.com. It has a good level of things for both kids and their accompanying parents. As far as dog movies go in general, I’ve seen so many better movies, but it’s okay, so I gave that five. As far as the dog’s perspective goes, it could’ve easily been better. The dog didn’t understand some basic human emotions, like anger…and I feel like that’s well within a dog’s understanding. Finally, was it halfway decent? I would say so, yeah. It’s an okay movie, I suppose, but I prefer others.