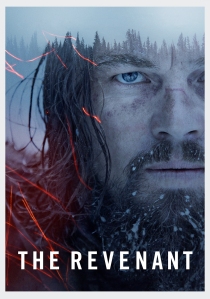 Welcome to DiCaprio Week! This week, I’m going to try my hardest to review all the main DiCaprio films I’ve never seen  – whether I want to or not! Besides, people have been dogging me to see a few of these anyway. So, the first up is arguably DiCaprio’s best movie, as this is the one where he finally won an Oscar. So that’s the question, is it really his best movie or just something snooty critics say? We’ll see. I never had any main interest in seeing this film for a couple reasons – one, the era in which it takes place, and two, it’s 2.5 hours long. Those two things can affect a viewing…but does it here? Let’s get into that.

The Revenant tells the story of Hugh Glass and his team, as they travel through the mountains. Their job is basically just fur tradesmen, but they also have to protect themselves from violent Native Americans that are quick with a bow and arrow and scalping knife. When Hugh is attacked by a bear and narrowly escapes with his life, his team leaves him for dead, alone in the mountains where hidden dangers lie. He must regain his strength all on his own to finish his own trek and have his revenge!

Right off the bat, it’s not hard to see why this movie won an Oscar…it’s intense…and bold. Things happen in this movie that no one ever dares to do in any other film. The things DiCaprio went through in this film made him worthy of an Oscar. If he didn’t get one for his role in this film, I’m honestly not sure what he would do after that. This guy ate raw meat in his film. He picked a fish out of the water, flopping around, alive, and just…eats it like Smeagle. All of that is authentic. And he’s a vegetarian! Just think, if you’re me, thinking this is all maybe some great CGI and realistic props, then learning how real a lot of the scenes are…you’d be in as much awe as I am right now…and a little disturbed. Blech. Can’t be safe.

Besides DiCaprio’s dream to be Bear Grylls, what else did this movie have? Great directing and editing. It has an amazing focus on scenes filmed in one take, but it doesn’t try to make the entire movie one take. It’s a little bit of both normal shots and one take shots, in what I call probably the most balanced version of that film style I’ve ever seen. The natural lighting made for a different tone in the film. Altogether, this movie feels different…in the most perfect of ways. It’s not only a great movie to analyze as a film student, it’s also a great movie to just enjoy – and there aren’t many of those around.

Let’s get into the nitty gritty, though, and break this thing down point by point. 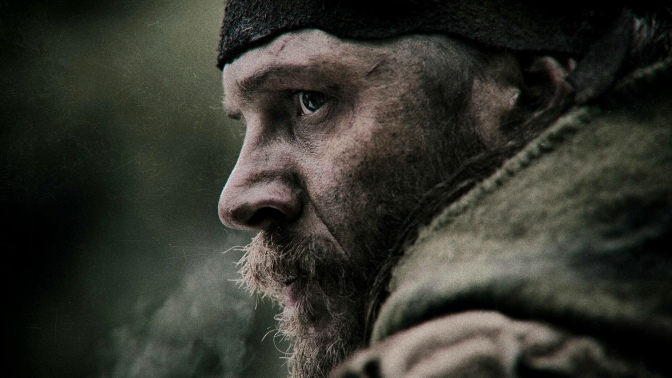 First off, let’s talk about the people in this film, most notably DiCaprio himself. This was almost like Tom Hanks’s Castaway when it came to single-handedly carrying a film without much dialogue. His performance in this movie was strong, but he wasn’t the only one in the movie. Tom Hardy and Will Poulter also did an extraordinary job pulling off their characters. Everyone had their own reason to be there, even though they were all on the same team…they all had different agendas that ultimately added to the plot. So yes, the acting was phenomenal, the characters were all very memorable, they added to the plot, they all worked together, whether they were teammates or fighting each other, and truthfully, I wouldn’t have any other set of actors play these roles. Whatever they did, they chose the perfect people.

Next up, we’ll talk about how it was written, as this was also impressive and somewhat surprising. The lack of dialogue from DiCaprio is dialogue in and of itself. His body language speaks volume, while Tom Hardy’s psychotic tangents take the dialogue to other extremes. While a majority of this film focuses on DiCaprio’s journey, you can at least say it’s not really super convoluted. There’s a lot that goes on, but you understand every second of it. The story in this film is a mixture between survival and vengeance for DiCaprio’s character, selfishness and greed for Tom Hardy’s character, and the bittersweet torn nature of Will Poulter definitely solidified motives from everyone to make this a pretty deep story. It is definitely original, never seen anything like it, and from the get-go, it’s quite an interesting film as well…which definitely makes me happy. Oscar-winning movies don’t always do it for me, but this did.

Here’s another fantastic focus for the film, what’s going on behind-the-scenes. The visuals are always praised for this film, and for good reason. You have natural lighting, realistic wound makeup, plenty of gore and violence, shocking scenes that you’d rather look away from, but you can’t! Everything screams great visuals. The directing and editing, as mentioned above, was noticeably amazing. Those one shots were timed just right so that instead of a gimmick, it felt more natural. Soon, you’ll think that WAS the only way you could film these scenes, and just imagine editing together the war scenes and stitching together those one shots with standard filming styles. It was certainly as advertised, and the music and sound editing especially was once again, very noticeable.

Alright, so the narrative arc is also nearly perfect, but it does end immediately after the main climax, so it does leave you a little disappointed. Basing this off of everything else the movie’s already had, it wouldn’t be hard to really tell the audience what the new norm is…I’m sure they could probably guess for themselves, but it wouldn’t have hurt anything to have a few paragraphs at the end to tell us how everything wound up for the main characters in life, as this is a true story.

This is the lowest-rated category of the bunch, which is understandable. This is the hardest category to actually get points for. I might consider this rewatchable. Way down the line, because as powerful as the film is, it’s not something I immediately want to see again. Likewise with how fun it is to watch. I wouldn’t necessarily say what I felt while watching was fun, but I can say it definitely sucked me in throughout the movie. That being said, I feel like I need to talk about certain things in the movie, but not the entire movie, and I have no impulse to purchase this film.

Alright, so the questions I asked myself before seeing the film are above. First one being, was this DiCaprio’s best work/one that I’ll mention as one of his best works? Definitely. I may not watch it all the time in the future, but that won’t stop me from recommending it to others that haven’t seen it. How about the time/era? Did it bother me like I thought it would? No, actually. The director did an incredible job making the era feel real and not like a production…and you really don’t care what era it is while watching…that doesn’t really matter in the long run.  Was this Oscar-Worthy? In way more ways than one, and that’s one of the answers that surprised me. I was fully expecting it to be Oscar worthy in one or two places, but it’s so perfect in so many places it’s hard not to say it should have won every single Oscar out there…other than best actress…there’s NOT many women. Does the Length of the film bother me? Truthfully, I hardly really noticed the length of the film while watching it. I mean, I did get tired while watching…but then again, I started the movie at like, 9:30 pm. My bad. Finally, halfway decent? Duh.