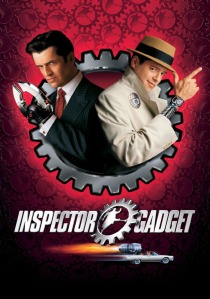 Da dee da dee dum, Inspector Gadget. Da dee da dee dum dah dum, yahoo! Man, that’s a catchy theme song, and of course, they included it for 1999’s first live-action retelling of the famous Inspector Gadget. There is, of course, another live-action film starring French Stewart that’s actually a little closer to the source material than this movie is…but since I don’t actually care about that, this is my favorite of the two films. It is also the hardest one to find. You can find the second movie, like, everywhere…but not this one. Why not? Well, I don’t think it was a very popular movie in general. But…I do like it. What’s it about?

It’s really an origin story for Inspector Gadget, a man initially named John Brown whose dream was to one day be a cop that saves lives. When he gets into an accident, the gadget program transforms him into part man, part swiss army knife, ultimately to be known as Inspector Gadget. He believes he can now be the police officer he’s always wanted to be. But the head cop sees the gadget program as a publicity stunt brought on by the city’s major and gives gadget unimportant cases to follow up, instead of major cases, like the murder of his crush’s father. That is until the nefarious Claw begins to make himself known.

This wasn’t just an origin story for Inspector Gadget, but also an origin story for Claw. No, it definitely doesn’t follow the cartoon source to a T…not by a long shot…but why should it? I’ve never been one to be a hardcore “follow the source material” nut. In fact, here’s something you need to take into consideration. The source material is a cartoon. This actually grounds the story into something that you can connect with, and kids can still really enjoy it. You see Claw’s face. So what? You see him before he gets the claw. So what? They give a deeper meaning to Gadget himself…so what!? It’s more real this way, and I really appreciate it.

But hey, that’s just me, right? Let’s break the movie down and try to explain what’s good and not-so-good about Inspector Gadget.

Alright, so the score for the people category isn’t too shabby, but it’s also not “perfect”, so where does it go wrong? Mostly, in the acting and chemistry subcategories. Why? Well, it’s a kids movie, so they don’t always focus on strong acting since kids don’t really care…they just want to laugh. The same goes for chemistry. They aren’t necessarily bad subcategories, the movie just didn’t really care to focus on them, and so they only get half the points.  Everything else is good, though. The characters are all very memorable, I wouldn’t change the casting for the world, and everyone actually plays an important role in the film and adds to the plot. So overall, they did pretty well here.

Next up is the writing score, which got the same score as people. So once again, pretty good…not perfect. Where did it go wrong? Again, two categories – this time balance and story. This is a kids movie, it should be a little more balanced than it ultimately is, and this falters when it’s trying to decide how to utilize Claw’s character. This is where I prefer Claw’s character in the second movie to this one. They just made an evil Inspector Gadget, which was silly but didn’t utilize his abilities very well. The whole extra gadget guy bugged me and felt imbalanced. As for the story, it IS about a man who has a dream, but that’s mostly overshadowed by silly kids stuff. The rest is good. The dialogue IS memorable. I was saying lines out loud while watching it. I consider this a very original take on Inspector Gadget, and I definitely consider it interesting.

Next up is behind-the-scenes, which got a slightly lower score, but still mostly okay. Where did this one go wrong? This time, we have three categories that could’ve been better. That is visuals, directing and editing. The visuals were very cartoony when it came to the actual gadgets in question, so those didn’t look very authentic. The rest of the movie was just typical, nothing really stands out. The directing didn’t seem like a challenging role, nor did the editing. It’s just a kids movie, guys. I do think it’s as advertised, and I liked the music choices, too.

Once again, we arrive back to an 8/10 score. So what were the two categories that could’ve been better? The climax and falling action. This is a movie that feels like it has more than one ending, and when that happens, it immediately gets docked in the points. The falling action is mostly short-lived and isn’t as deep as you’d like. Everything else is perfectly fine for the narrative arc. The introduction has two very interesting origin stories for both Inspector Gadget and Claw. The inciting incident is mostly just the accident that creates Gadget. The obstacles just come down to trying to be a hero with faulty gadgets.

The entertainment category took a little bit of a hit, and I think I know why…nostalgia. Nostalgia can make a movie really fun to watch, and that’s true here as well. I consider really fun and rewatchable, but that doesn’t mean it’s as technically entertaining as I once thought. I don’t really want to buy it. I wouldn’t mind owning it, I guess, but maybe just as a gift. I also don’t really have an impulse to talk about it with anyone, and it really only sucked me in here and there. Which all-in-all, has us ending up with the 6 score. ]

Now, onto the specialty questions that I wrote before seeing the movie. First of all, we have the question of how this is with both kids and family. It’s definitely kid-friendly, but there are certainly moments in the film that will nod to parents while watching as well. As for comedy, I mean…I laughed. Maybe out of nostalgia, maybe out of ridiculousness, but I laughed. As far as adaptions go, I’m very happy with the route they decided to take. It was unique and original, and it’s the only one of its kind to do that to Inspector Gadget. As far as gadget-isms go, you’re right, there’s not many of them. It maybe has half and ignores the rest. Like blowing up the captain, like hiding Claw’s face. Like having that nasal voice for Gadget. I don’t really care all that much, but I do understand where others would. Finally, does it hold up to memory? Oh absolutely, this was a nostalgic dream come true.