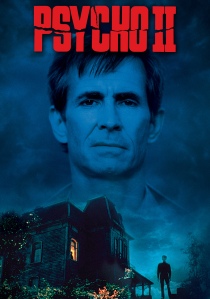 Welcome to Psycho Week: Day 3. So, as I said briefly in my book review yesterday, the movie version and the book version of Psycho II are completely different. The reason why is sort of funny when you think about the whole reason behind it and why both the book and the movie versions of Psycho and Psycho II were both nearly 20 years apart is so interesting. The funny thing was that the book was written out of frustration and annoyance, so it was so much worse than the movie. I can certainly say that this is when movies are better than their book counterpart. What is the Pyscho II movie about? I’m glad you asked. Let’s get into it.

After nearly 20 years in a mental institution, Norman Bates is now cured and back home, or so it seems. Almost immediately, Norman begins to lose his mind, believing his mother is back again. When the deaths begin to roll in, even the audience begins to question Norman’s sanity, but something does seem off about his experiences if you’re familiar with the original film. They are certainly different. Especially when the woman he witnesses isn’t Norma Bates, his supposed adoptive mother. It is his “real” mother, who is actually still alive. Or is she?

Now I will say this, the movie isn’t exactly Hitchcock, but it tries really hard to be with all of the twists and turns it throws our way. Honestly speaking, I’ve seen this movie before, but it was a while back, and everything was still actually pretty shocking, so all-in-all, it actually feels like it belongs in the franchise, unlike the second book, which really just wanted to [book spoiler alert] kill Norman Bates. [End of spoiler].

To be honest, this movie surprised me, because I didn’t really remember it being as good as it was, let along with a score that was as close to the original as it was. But let’s get down to the nitty-gritty and break this movie down.

First up is the people category, which almost got a perfect score, other than the chemistry angle, which just wasn’t really focused on for the most part. Everything else got a perfect score here. The acting was really well done, the characters are still memorable, no one else could really play these roles other than who we have here – I mean, you do have two original cast members showing up. Also, everyone in the movie plays an important role in the direction of the plot. So far, it’s a pretty good start here.

Next up is the writing score, which got a good score, but not perfect. It wasn’t the most memorable film when it came to the dialogue, and it wasn’t super balanced either. It was trying way too hard to have a shocking twist that it sort of went all over the place, which wasn’t the wisest choice. They should have kept things simple. Everything else was perfect, though. The story was good as they definitely added something to the franchise. It felt original and fresh, and not just a copy of the first film, and it was also really, really interesting when it came down to what was going on.

Next up is the stuff going on behind-the-scenes, and this is the category that gets the biggest punch to the gut, as the BTS score was only 6 points here. I think it was an as-advertised film, but everything else was mostly forgettable and didn’t stand out. The visuals were just fine, the directing was good in parts, but trying too hard in others. The editing was just okay, and nothing about the music stood out.

Onto the narrative arc score, which almost had a perfect score. This time, it faltered in the climax, which really just feels a bit anticlimactic, but everything else was pretty perfect. The introduced re-introduces us to Norman Bates and what’s going on with him 20 years later. The inciting incident is when he experiences his mother again. The obstacles were more self-battles than anything, as Norman battles himself to stay sane like he feels like he is, even though he’s having really strange experiences.

How entertaining is it? For that, I would say decently entertaining. I would certainly consider it completely rewatchable, and I had a lot of fun watching it, that’s for sure. However, as much as I wouldn’t mind owning it, I don’t care to buy it. I also didn’t really have a huge impulse to talk about it, though I would let people know that it’s not that shabby, at the very least. Finally, I don’t think it sucks me in as much as the original, but it does here and there.

We are finally up to the specialty questions that I wrote before seeing the film. Firstly, I wanted to know how much it felt like it belonged in the Psycho universe, being a sequel, and it does a really good job fitting in and being different. So yes, it does add a new dimension to everything. The mystery in it is also really strong and throws you in for multiple loops. I did want something more simple though, which the film didn’t have as much of, so that gets half points. Finally, it’s definitely halfway decent.