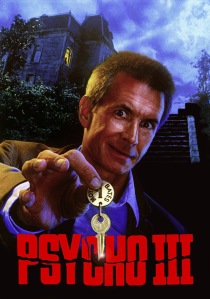 Welcome to Psycho Week: Day 4. Today, we review Psycho III, and I’m really beginning to appreciate Anthony Perkins’ continual support for this role that he plays so well. I mean it. You can tell he ages normally, but the second he offers us his innocent smile, it’s like the best anti-aging cream ever – it’s pretty neat. That being said, this is the second to last film, or otherwise known as the penultimate film in the franchise. The real question is…can they really keep up the pace the first and second movie had (in my opinion)? Truthfully, not really.

This film focuses on a nun that left the convent because she couldn’t control her urges, and so, that must mean that God doesn’t exist. So, she heads out on her own and ultimately finds her way to the Bates Motel. Unbeknownst to her, she looks a lot like Norman’s other famous victim, Mariane Crane. She even has the short blonde hair and initials. However, he can’t kill this one. This one’s different. This one isn’t perfect. She’s damaged, which strikes a chord with Norman…but will that be enough to calm his internal Norma Bates anger?

The first thing I immediately thought of when this film started was the Pyscho II book that also started off with nuns. Just like the book was a response to the movie, I feel like this movie was a response to what the book did…which is constantly hilarious to watch…but that doesn’t really make a movie good or bad, just interesting. The use of the nun, of course, was entirely different and more unique and believable than what they did in the book, anyway, so I’m still not complaining.

My complaints mostly had to do with the fact that they seem to be running out of steam, so nothing was really original here. They couldn’t really keep a very good mystery in this film. While there is something there, it’s not really a mystery that you truly care about. It’s mostly about the “mother” issue addressed in the second movie. But at that point, the second film introduced more of an idea, not an actual question I wanted to know the answer to…so…take that as you will.

That’s only my first impression, though. Let’s get into the nitty-gritty and break this thing down, shall we?

One of the first things you’ll notice while watching this film, if you’ve just come off watching the first two films, is that the acting is slightly worse. I’m sure that can be attributed to a poorly-written script…but the acting, in general, was a bit different. That being said, the characters are still fine, they are still memorable, and I am increasingly impressed with Anthony Perkins STILL being in the movies. But not every character adds to the plot as well as the other films. Maurine seems to be the only real addition to what’s going on, so that’s not the greatest thing in the world. It also wants to have decent chemistry, which just turns out to be awkward.

So, the writing score wasn’t rated the best, either. Like I said before, the script was a bit poorly written, so the dialogue part, at best, was just okay. I think it’s a much more balanced movie than the second film, so it’s nicer to see the film taking a much more simple approach to things, but that didn’t really save it either. The story just wasn’t there. There were no messages, and there wasn’t too much in the film that felt new and fresh, either. Sure, it’s interesting enough as a sequel, but that’s it.

The behind-the-scenes category also got a poor rating, and that’s because every subcategory was mostly typical and nothing stood out. The visuals were typical, the directing was typical (disappointing, considering it was Perkins himself who directed this one), the editing was typical. It was advertised as a Psycho movie, and while sure, it had the Bates Motel with Bates himself, it had plenty of missing elements that the others have had up to this point, as well – with nothing to fill in the void. The music was also forgettable here.

Being a simple-flowing film, it followed a pretty decent narrative arc. The introduction introduced us to all major players in the film and why they all end up at the Bates Motel. The inciting incident is mostly when Norman sees Maurine, reminding him of Mariane from the first film – but also when he finds out something deep about Maurine that changes his views on everything. The obstacles come down to really, really basic crap with Norman and his mother and fighting the urge to kill…so a few meaningless deaths. The climax wasn’t too bad, and the falling action was just…okay.

I wouldn’t really call it an entertaining movie, though. It’s rewatchable – only as part of a franchise viewing, it has fun elements to it, and there are things I want to talk about when it comes to Psycho III, but those things might easily turn into frustrated complaints. Everything else just wasn’t there. It wasn’t a must buy, nor do I really even care to own it. Finally, it never once sucked me in as an audience member, which is sad for the series.

Lastly, the specialty questions that I wrote before watching the film. First of all, this is a Psycho movie, so how well does it do there? I briefly mentioned this before, but it’s not the greatest film in the franchise. You know it’s Psycho because there is still the iconic Bates Motel and the same Norman Bates, but the little things that kept it unique from the other movies were ultimately missing. What about the mystery? Every Psycho movie has a mystery element. That’s true here as well, but the mystery was stupid and not something that I think anyone really cared that much about. They could have done a different mystery and no one would have complained about this one. It’s a horror film, how is the horror element. To be truthful, I actually believe this movie held a lot of tension and scary moments – more so than any of the other movies I’ve seen yet. It had some really good claustrophobic moments in there too that take the cake. Does the movie add anything new? Well, sort of. The entire storyline centered around the nun was original, but the rest of the movie felt extremely familiar, so it just wasn’t enough new. Finally, is it halfway decent? For this, I’ll just give it half points, because it was decent in parts, but it could have used a lot of help in other places. Take that as you will.