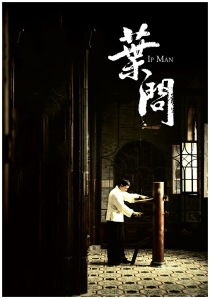 Welcome to Ip Man Week: Day 1. Anyone that knows me knows that I try to avoid watching foreign films as much as humanly possible. The reason is an age-old one. I like watching movies, not reading them, right? So I would often watch a foreign film if I can watch it dubbed. People say that’s horrible. You need to listen to the originally intended version. So, that’s what I did with Ip Man. The funny thing is, the Chinese do the same thing as us, they dub their films in post-production. It just much harder to match up the quick-spoken words of the Chinese vs what we do here. So even though it was the standard version of Ip Man, it still looked and sounded as fake as if I listened to an English dub. The only reason why I wanted to listen to the original this time is because of Donnie Yen. No one can imitate his voice. I now know that. So how was this movie that everyone always recommends as one of the best martial arts films in a long time?

Well, Ip Man focuses on the life of Master Ip, a man so good at martial arts, no one else could ever beat him. When the Japanese take over his city, Master Ip loses his position, his money, and his estate to the Japanese. When the Japanese give the word that they are welcoming martial artists into a ring to fight for a bag of rice, Master Ip joins when he learns they are beating his friends to death, disrespecting honor for entertainment purposes. Ip Man is there to settle the score and bring honor back to his town.

I’m relatively positive that the events in this film don’t actually mirror the life of Yip Man, but rather were made up to showcase Yip Man’s martial arts abilities, which of course, is very impressive. The things that happen to the setting most likely happened in his life, like the Japanese Invasion, but I feel like they used that for part of the plot that didn’t truly happen. Then again, I really don’t care about how close it is to reality. Reality is often boring, anyway. I think showcasing the abilities that Yip Man actually had, making a character out of his beliefs and his talents is definitely something I’d be interested in seeing, which hypes me up for this week, actually.

As for the martial arts, is it the best I’ve ever seen in film? It’s hard to say, but I think the answer to that question is a resounding yes. The production value wasn’t very high, that was clear to me, so I’ve seen better-looking movies, but as for the fighting? That was probably one of the most satisfying martial arts I’ve ever seen, period. Move over Bruce Lee, because this is the guy that trained you – maybe HE is the master.

Let’s break the film down and discuss everything that makes this film tick.

The people category got a perfect score, let’s talk about why. First of all, the acting wasn’t very impressive on its own. At times, it was even corny. However, whenever martial arts come into play – I consider that part acting, part dialogue, actually. So, while acting was going to initially get half points, the amazing choreography of the fighting made it a solid 2/2. I do believe there were just enough characters in this film to have them be considered memorable, but only just enough. The same actually goes for how important they are and how they add to the plot. I’m rather convinced that no one else could have played these roles, and they all have very good chemistry. I was certainly blown away with this category.

Next up is the writing category, which nearly got a perfect score as well. The only thing that didn’t get a perfect score was dialogue. Now, like I just said, martial arts is something I consider to be part dialogue, so why didn’t it get something perfect? Because the actual spoken dialogue was mostly cheesy and terrible. Whether you’re talking about listening to the tone of their voice or if you’re reading the subtitles, it’s just horrible. The martial arts saved it a little, but not fully. Other than that, it’s a completely balanced story. It’s about a man bringing honor back to his town and to his friends that he lost. It is also extremely original, and no bone in my body will tell you that this film wasn’t interesting, because it definitely is.

The BTS (Behind-the-Scenes) category almost got a perfect score as well. Where it went wrong was the visuals. Like I said before, it’s not the prettiest movies in the world. It looks and feels cheap and old at times. I’ve seen better visuals in martial arts films, but the fighting is clearly the best here. The directing was verrry well done, as it takes a lot of practice before you can actually direct a fight scene well, and they had a lot of them in this movie. The editing, same thing. It’s hard to edit a fight scene in a way that the audience can understand what’s going on, and they did it here. It is as-advertised, and there’s actually some good use of both sound and music in Ip Man.

Next up, we have the narrative arc category, which…you guessed it, almost got a perfect score. The main issue came to the falling action, which was sort of there, but sort of wasn’t at the same time. Everything else was good. The introduction, when we see how good the man can fight. The inciting incident, when the Japanese take over and ruin things for everyone. The obstacles is just different fights. The climax, of course, is the culmination of everything else, and that too, was done very well.

How entertaining is it? In a word? Very. I consider this an extremely rewatchable movie, it’s also really fun and sucks the audience in. I also wouldn’t mind having a discussion with someone about this movie, because I think it needs to be a household movie. Also, I wouldn’t mind owning it, but I won’t be the one to buy it.

Finally, we’re onto the specialty questions that I wrote before seeing the film. I always have worries about foreign films and having to read the screen. Personally, I think it was extremely balanced, so I never had a problem with reading the screen with Ip Man. Next, I was told this is great martial arts, and it is. This is the best martial arts I’ve ever seen in a movie. How did Donnie Yen do? Amazingly. When people bring up his name, it will no longer be Rogue One that I mention, it’ll be Ip Man. As far as biographies go, how did it go? Well, like I said, it probably wasn’t true to life, but I think I preferred it that way. I never once considered it boring. Finally, halfway decent. Of course!