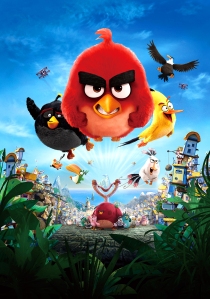 Welcome to Kids Week: Day 5. Here’s the second review of the day, The Angry Birds Movie. I wasn’t initially planning to review this movie this week, but since I never really watched it before, the timing was perfect. Now, we know that there are too many variations of the Angry Birds game to count, but I remember playing the first one, the seasons version, and of course, the Star Wars version. The nice thing about the game was they could always change it around and add a new theme like Transformers was a recent theme. However, it was always the classics that you remember the most, and it’s mostly the classic game that The Angry Birds Movie is based on. It is always iffy, though, when people try to make a movie based off of a game, and this is even riskier. Angry Birds didn’t really have a story, and it was a phone app of all things…so they would clearly need lots of creative liberties taken, and there were. Let’s get into it.

In the 3D animated comedy, The Angry Birds Movie, we’ll finally find out why the birds are so angry. The movie takes us to an island populated entirely by happy, flightless birds – or almost entirely. In this paradise, Red (Jason Sudeikis), a bird with a temper problem, speedy Chuck (Josh Gad), and the volatile Bomb (Danny McBride) have always been outsiders. But when the island is visited by mysterious green piggies, it’s up to these unlikely outcasts to figure out what the pigs are up to. – IMDb

Here’s the thing that comes to mind when you’re watching a movie about a game that doesn’t originally really have any plot. You played the game for all the physics that you had to get just right. It was and is addicting, and that’s what you want to see in the movie, as well. However, you get a backstory that lasts for two acts which leads up to a pretty epic climax that will sure to make Angry Birds fans happy…but I question what they’ll think about the first two acts, which is all story, which isn’t what we look for in the birds. Even though they are taking a professional approach to the game, giving it meaning, fans of the famous game may find most of the movie a bit dragging on.

Now, while I do understand that angle, I also want to say they could have easily utilized elements of the game throughout the movie, and they focus more on character than on what those characters are used for. Sure, Bomb blows up, but he never really blows up in the movie. For instance, they get the slingshot early in the film, and say it’s for those times when you need to get from Point A to Point B quickly, and then the three angry birds go search for the legendary Eagle, hiking through mountain ranges to do so….couldn’t they have just used the thing they just introduced? In addition to attacking the pigs, they could also use the slingshot to either get to the mountain or to knock down the obstacles in their path? Or blow them up? Or something? Why did the super-fast bird climb at the pace of the other birds? Is he lonely? Truthfully, they didn’t fully utilize what they should have when it came to the game. Imagine we watch a Superman movie where he doesn’t use his powers until a half hour is left.

Of course, these complaints are mostly just first impressions and mostly biased, anyway. So, let’s go ahead and break this thing down to give it a fair score. Let’s interpret the stars.

One of the nice things about these angry birds is that each of the different birds has their own unique ability, which in the film, translates to what kind of attitude and personality they have – ultimately making these characters diverse and memorable. The diversity in the characters is brilliantly utilized, as it should be when it came to the plot. Every bird had their own use to what’s going on, so I appreciate that, plus they all seem to have really great chemistry with one another. As with most animated flicks though, I truly believe anyone could have probably filled these roles if done right, but the cast they do have is very good, as well. Finally, the acting. It’s not exactly a movie trying to win an award for the acting, and it shouldn’t. Only half points there.

While I consider The Angry Birds Movie an original take on the video game and movies in general, and it is definitely interesting, nothing else really stood out. The dialogue was funny sometimes, but nothing I’ll ultimately remember, I think the entire Eagle subplot wasn’t needed, in my opinion. It certainly wasn’t dealt with in an Angry Birds type of way. The story itself…I’m not really sure it was very strong. It was just their take on the game, which does its best to explain the anger in the birds and why the pigs are there in the first place, which I don’t think most people cared about anyway.

We’re up to things going on behind-the-scenes, which is almost always the same for animated films. The visuals are usually fantastic, and it is usually as-advertised, but everything else is typically average. The directing is fine, the editing is fine, and the music is fine, but none of it stands out as great or notable.

The narrative structure was mostly intact, other than the obstacles. I feel like the obstacles should have clearly been the stuff that goes on in the games, but that turns out to be more of the climax. The obstacles in this film mostly had to do with the hike up the mountain for the wisdom they need to destroy the pigs. Now, everything else is fine. The introduction does a good job introducing all of the major players, the inciting incident is when the pigs show up, the climax is pretty much the Angry Birds game, and the falling action returns to a new sort of norm, which was all fine.

Was it entertaining? Well, yes and no. I feel like it was entertaining enough. There was some great humor that works for all ages and everything, but it’s not a knock-your-socks-off type of entertaining film. I consider it rewatchable in the sense that I might check it out again if it’s on TV a few years from now. It’s definitely a fun movie though, and it sometimes sucks you in…I just have no real impulse to buy it, own it, or even really tell people about it…they probably already know everything they need to know about it, anyway.

Onto the specialty questions that I wrote before seeing the movie. For kids week, this movie works. There’s a lot of physical humor, action, and colors. For a family, there’s a lot of innuendo things going on, including a play on words for curse words, which adds to the comedy of the film, in which there is a ton of good stuff to be found. As for being an adaptation of the game, I would say it’s certainly missing something. They can’t just make it a third act, it just needed more, and they could’ve easily done more. As for being halfway decent, I can easily say that much, yes.