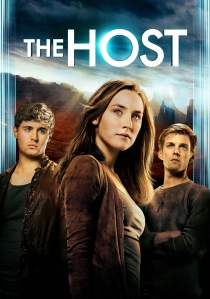 Welcome to Mind Control Month, Week 1: Aliens [Day 1]. What a mouthful. I’ve never done a blogathon type deal before, but I’m doing it now with a bunch of films about mind control. Each week will be a slightly different variation of that, and the first week is all about aliens taking over our bodies and controlling our every action…that is basically mind control, right? Most of this week (3 films, to be exact) will be a variation of the Invasion of the Body Snatchers story, which makes perfect sense, but not the first one. This first review is a movie I’ve seen in the theater and never again, The Host, based on a book by the author of the Twilight stories. You’re already excited, aren’t you? Let’s take a look at what it’s about.

It’s in the near future, and aliens have nearly taken over Earth and several other worlds as well, by inhabiting the bodies of most humans. Their initiative is simply to make the world a better place, but in the process, they naturally all-but-murder the human hosts. That is, until they run into Melanie (Saoirse Ronan), who has a fierce desire to survive. So, even though her body is taken over, her mind remains intact, constantly talking to her alien inhabitant to prove the purpose of human kind, no matter how self-destructive they can ultimately be.  – Dave, Dave Examines Movies

The first time that I saw this film, I can only remember one thought – that I was disappointed. I was ultimately expecting something else, and it’s actually quite a slow-moving film. I understand why that is, but it could’ve had a different pacing that probably would’ve worked better for the film than what we have. The second time I watched it, I had another thought, it’s not as bad as I originally thought. You have all of these expectations based on the genre and author and you get so much less. Get rid of those expectations and you get a movie that’s…okay. It’s not incredible, but it’s still okay.

To back my claims up, let’s go ahead and break down The Host and interpret the stars. 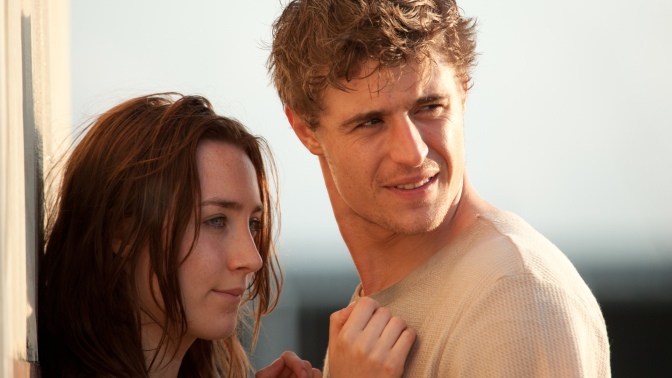 Hey-o! Looks like it’s not as bad as I thought, especially in this category. Yes, the pacing may be a little strange if you’re watching it for the first time expecting more, but it’s not hard to really see that it’s very character-oriented. More-so than I would say Twilight ever was. What that struggled with, this was the opposite, but it struggled a little bit with having too much character depth – as that was most of the movie, guys. Just a bunch of Saoirse Ronan talking to herself. Odd, but not terrible. The acting does have a number of ranges with everyone involved, so that was a nice touch. The characters are all very diverse, they all have a reason to be there, and they all have their own unique ability or skill that helps further the story along. They also work rather well together, creating a unique perspective on the whole love triangle thing, where it’s not actually a love triangle, but it is…it’s complicated. The only problem I actually had comes down to the casting. I’m pretty sure most of the cast could have been replaced, but I did love Saoirse Ronan in the lead.

Next up, we have the writing score, which also received a near-perfect score. As I’ve said earlier, it has a weird pacing, but that’s totally opinion and expectation-based logic. You expect something more, and because it doesn’t happen, you immediately say it’s bad pacing, but think about it. Ronan’s character is inhabited, Ronan’s character influences the alien, Wanderer, to learn more about humanity, leading her to the resistance, where they all discuss their big move to win back the world. It is as simple as it comes narratively speaking, so I have to give balance a perfect score regardless. The story has a lot to do with playing God, in a way. Yes, they can get rid of violence and suffering, but in order to do so, they need a huge rewiring process that is probably killing the entire world, it is a good story. I also consider this original. It feels like Body Snatchers, but at the same time, it doesn’t. Finally, is it interesting? Truthfully, I have to say yes. It may have a weird way of telling the story, but I’m still interested enough to know what’ll happen.

Now, the only real redeeming factor that The Host had in the behind-the-scenes category was its visuals. No matter what you think of the film, you have to at least agree that it’s very aesthetically pleasing to the eye, but that’s as far as it goes here. Nothing seemed super challenging from either the director or editor’s chair. It all seemed pretty simplistic there. It was slightly false advertisement, just because I think everyone was expecting more action than what they get here, which is basically none. Finally, the music could’ve easily been better, and it was just typical.

This was an interesting narrative arc, though. It really doesn’t have much of an introduction – which is just a super quick narrative summary of what state the world is in now. I wanted…more. I almost wanted to say the inciting incident is when Melanie’s body is taken over, but that’s not entirely true. It’s more about when Wanderer left the community and began turning “to the other side.” Plenty of obstacles, as there is a plain-as-day antagonist. The climax itself is a little disappointing and anticlimactic, but at the same time it sort of is a culmination of everything before it, so I can’t completely discredit it. As for the falling action, there is a clear falling action as well as returning to a new norm. So, take that as you will.

Alright, so as you can see, I thought the film was a lot better on a technical side of things, but it still rather lacked in the entertainment area. I do consider it interesting enough to warrant a good rewatchability score, I don’t think it’s always a fun experience to watch it. Like I said, it’s more boring than it really intends to be, so I have to take that into consideration. I don’t care to buy it, own it, or even talk to anybody about it. As far as sucking the audience in? It had plenty of opportunities to do that, it just never did, nor attempted to, for that matter.

Now onto the five questions that I asked before seeing the film. First and foremost, you’re all going to think this film is going to have a lot of action in it, and it doesn’t. The action it does have is barely anything, so I believe this is part of the false advertising you have with The Host. It’s listed as a romance, and this is a genre I agree with. It had a unique perspective on an all-too-overdone love triangle, so that was neat. It is listed as sci-fi, as it should. A lot of the pretty visuals had to do with convincing the audience this was in the future, and this is all alien technology, and that definitely works. I’m also a big fan of Saoirse Ronan, who probably really saves this film from being scored much worse – when I think of her, I think of The Lovely Bones, but The Host isn’t too far behind. Finally, is it halfway decent? Well, I haven’t read the book, but I still feel as though they did a pretty decent job at conveying the story they wanted to tell, no matter how anyone would take it, and you have to give them credit for that. I do.