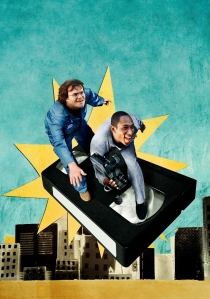 Welcome to Media Month | Movies on Movies Week – Day 4. The olden days of VHS weren’t all that bad were they? I mean, The Ring wouldn’t have been as good as it was if it were about a haunted DVD, would it? Plus, as far as home movies are concerned, VHS is all about nostalgia…though, it does depend on how old you are, I guess. For some, a VHS tape may or may not be as old and forgotten as an 8-track tape…but that’s part of the point in Be Kind Rewind. It’s nostalgic, it’s classic, it’s fun. Let’s start with the plot.

In Passaic, NJ, Elroy Fletcher runs a video store in a condemned building he claims was the birthplace of Fats Waller. Fletcher goes on a Waller centennial trip, leaving his foster son Mike in charge of the store. Mike’s peculiar friend Jerry tries to sabotage a power station and nearly electrocutes himself, getting magnetized in the process. He inadvertently erases every tape in the store. Mike and Jerry hatch an plan to hide the disaster by making a homemade “Ghostbusters” to rent to a woman whom Fletcher will be phoning to check on them. Soon, with help, their homemade versions of films develop a cult following. Will this new business save the store and the building? What about Fats? – IMDb

I may be part of a biased audience, to be honest, because this brings me way back to when I was a kid and my brothers and I would whip out the big fat VHS Camcorder to film our own versions of our favorite movies. We got so invested in doing them that we ended up doing our own original films for several years. So yes, I may be a little biased when it comes to this film. That being said, we also have to really appreciate the creative minds that went to work when creating this film. There’s a lot of random things going on all at once, and they are random enough to be pretty hilarious, too. It’s a weird movie, but weird in a good way. You should definitely check it out at some point.

This is all just first impressions though, let’s break down Be Kind Rewind to interpret the stars!

First up, we have the people category, starting off with the subcategory of acting. The acting was neither terrible or great, mostly typical and forgettable. The characters were fine, but I won’t be remembering them forever. I am convinced that nobody else can play these characters. They are perfect for these roles. In this film, there were characters that certainly held independent importance and purpose, but not enough. The main characters basically held the importance while everyone else sorta blended together. Everyone in this film really worked well together. Their chemistry was off the charts.

Next up, we have the writing category, starting off with the dialogue, which was actually really well thought out. There’s a lot of memorable lines, and just the way people speak is hard to forget. I would certainly say that the film is also very well-balanced and consistantly holds a strong focus on the story at hand. When it comes to the actual story, I can’t really say it’s the best. It’s got a few things here and there that I think a lot of people will enjoy, but it’s certainly not the greatest story ever told. In my opinion, I also think this film feels fresh and pretty darn original. Was this movie interesting? Of course it was, don’t be silly. I was all-in for this one.

Next up, we’re taking a look behind-the-scenes, starting with the visuals, and the visuals were pretty darn great here. Somebody knew what they were doing. Next, we’re taking a look at the directing, which slips by without you noticing it. That’s right, there wasn’t anything difficult or challenging for the director. They could’ve hired any director for the job and the movie would be exactly the same. Nothing challenging or difficult in the editor’s desk, folks. They stitched the movie together just fine, but there’s nothing else to report here because even a kid could probably do it. As with most films, I consider this film to be exactly as-advertised, which is good. There wasn’t anything fancy or memorable about the music. It was basically as good as it needed to be in order to keep the tone in place…and that’s what they did here, as well.

Next up, we’re chugging right along into the narrative arc category, which is one of the easiest categories to score highly in. First up, we’re looking at the introduction, which did perfectly. By the inciting incident, we knew who everyone was, the basic setting, and what’s going on in these people’s lives. How about the inciting incident? That was perfectly clear and set the rest of the film up for a good ride. How were the obstacles? Totally fine. There were plenty of clear obstacles in the way, just as you’d come to expect. How was the climax? It was okay, a little anticlimactic overall because it didn’t feel like any culmination of everything else put together. Alright, so how was the falling action? Well, it started to calm things down a little bit, but other than that, not the best. You never get the sensation that they are returning to a new norm, so it’s not a complete falling action.

Next up, we’re asking if this film is any good to be considered entertaining when all is said and done. First up, we ask if it is rewatchable, to which I say…yes! I would have no issues checking out this movie again! Is this a film I would consider fun while watching? Oh yeah, absolutely. Whatever technical problems the movie may or may not have, it is definitely fun, and that’s something no one can take away from it. Would I like to buy this movie? Well, maybe…if it was either on sale for cheaper or if I just bought the digital copy. What about talking to somebody about the film that hasn’t heard of it? I really have no impulse to tell anybody about it, honestly. Does this suck you in, though? Maybe in certain parts, but definitely not throughout.

Onto the specialty questions that I wrote down before seeing the movie. First of all, how does this fit in with the weekly theme of movies about movies? I don’t think anything could be any truer. What we have here is a ton of creativity and originality based on the love of film in general, which adds to the concept of making fan-related films, so full points on both of those areas. As for the genre-specific things, like drama and comedy, I have to say the comedy is different but smart. Drama, on the other hand, not so much. It’s mostly about being silly, so there aren’t many dramatic aspects to it, although it can be found – half points there. Finally, is it halfway decent? Definitely.