It’s that time again, ladies and gentlemen. Time for reflection and looking back to 2017’s year in films. Keep in mind, there are still a few movies I have yet to see that can’t be added to this list. Films like Justice League, Jigsaw, and Murder on the Orient Express. I’ll explain more of where these films might have fit had I seen them, but as it is, it is the end of the year, which means it’s time for a summary.  At the end of the awards section, I will list off the best of my scoring categories, so check that out.

Most Enjoyable Movie of 2017 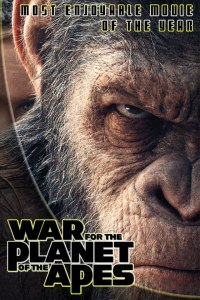 Out of all of the films that I saw in 2017, there was only one movie that received full marks on the entertainment category going over Rewatchable | Fun | Impulse to buy| Impulse to talk about | and Sucking the audience in. That movie was War for the Planet of the Apes. It was deeper than anyone really imagined it would be, and for some, that was a disappointment. For me, it was enjoyable in a number of ways, way to go.

Most Disappointing Movie of 2017

Thankfully, there wasn’t really a bunch of disappointing movies this year. While there was disappointment here and there, nothing really got to the point of “never again”.  For instance, while I was disappointed in some elements of the remake of Beauty and the Beast, I still thought the movie was fine and I wouldn’t mind seeing it again. So, the winner, or loser dare I say, of the most disappointing movie of 2017 is the horror film, It Comes at Night, which was probably the most boring horror film I’ve ever seen.

Most Surprisingly Good Movie of 2017

This is one of my favorite categories each year because while it may not be the highest scored movie (though, sometimes it is), it is a movie you never really expected that much out of it, and it ultimately surprised you in a positive way. This year, that movie is Baby Driver, which I ultimately thought it was just going to be another car movie with an actor I was never really the biggest fan of, but this really surprised me. I’m not including best musical this year because I just haven’t seen enough, but if I had, this would also be the winner of that, because even though it’s not a musical, it still follows a very similar structure. Any film student should study the use of music in this movie.

I can’t pretend and say I’m an expert in any of the adapted films this year, but I can at least say that I studied aspects of the original source after seeing the movie in order to compare. Yes, after the movie. While The Dark Tower may technically be rated better in my list, I do know that it upset a lot of die-hard fans that read the book series, so to say that was the best adaptation would be a bit of a spit in the face to them. However, I did read The Shack, and not only did they get everything right for an adaptation standpoint, they did a wonderful job translating it into movie format for the big screen, so in the end, The Shack is this year’s best adaptation.

Interestingly enough, both the good and bad adaptations of the year were religious-based films. You’ll notice the difference, too. For the most part, it all comes down to production value and in general, just taking the movie seriously. Pureflix often has the tendency to not understand the point of film….they certainly don’t understand their target audience. Plenty of their films are about teaching you that even though you don’t believe in God, you’re wrong, and they’re going to prove it, either legally (God’s Not Dead) or through journalizing methods (The Case for Christ), either way, their methods fall flat because in both cases, they use the Bible as part of their proof, as a history book sketched in stone. You can’t prove anything to an atheist who disregards the bible itself. I can go on and on about this, but if you want more, just read my reviews. The worst adaptation of 2017 is unequivocally The Case for Christ. 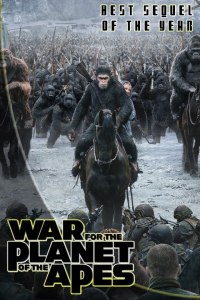 This is the second win for War for the Planet of the Apes this year, and by a pretty decent-sized margin, this won the sequel category. When I think of sequels I consider if they take what they’ve already done and added to it, and they’ve always done a great job at freshening up this series, and it really does add new (and old) things. 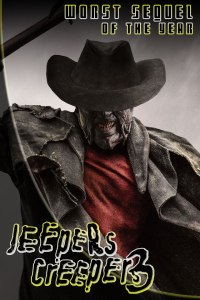 My review for Jeepers Creepers III will be on YouTube on Tuesday, so I don’t have this available to check out yet, but in general, it is the worst-rated sequel of the year. It has one cool aspect ot it, one, and that is the thing that connects the first and second movie. It basically starts off immediately after the first film and ends immediately before the second film. Other than that, there’s not much to give this film praise about. 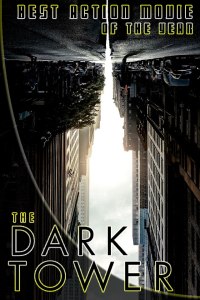 Now, The Dark Tower surfaces. Honestly, the people that don’t like this movie aren’t really the smartest folks in the bunch. They focus way too much on the source material and miss out on a truly great movie all around. I could have done without Matthew McConaughey, but I’m not going to let that ruin my experience with the movie. I would definitely say this action-packed fantasy film deserves the spot in the best action film.

There weren’t a ton of animated films that I saw this year, but it was between Cars 3 and Despicable Me 3 for the winner of the best-animated film. I ultimately went with the movie that was scored a little bit more, which was Cars 3.

Here’s another category I don’t normally include in my reviews, but this time around, I made sure to keep it around, and it was really a no-brainer. Dunkirk was an anticipated movie all on its own, thanks to Nolan’s involvement, and the film was a masterpiece when it came to being historically accurate and thrilling. 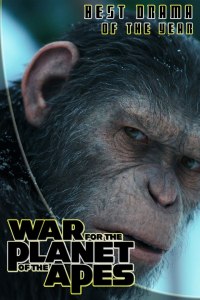 This is the third win for War for the Planet of the Apes, one of the most surprising parts of the movie was the sheer fact that it was probably more dramatic than it was action-based. It was deep and the “war” element had more to do with Caesar’s own internal conflicts. The one movie that probably was a runner-up was Gifted. 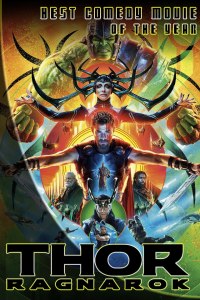 As surprised as I’m sure many of you were, calling Thor: Ragnarok a comedy wasn’t something I was really ever prepared to do. I wanted something dark and epic and unstoppable, but what we got was perhaps one of the MCU’s funniest movies, period, and they did it in such a great way. I definitely laughed a lot when it came to this movie and I can’t wait to see it again.

Here’s where I could’ve done better. I never saw Murder on the Orient Express, but I could imagine that one winning here if it is any good, that is. That is more of a direct mystery film, but there is something to be said about Ghost in the Shell, too. There is a clear mystery at the heart of the film, which for the most part, is pretty original and unpredictable, so I still think it deserves to be in the spot.

This is another category that I haven’t seen a ton from in the year, but that being said, I can still happily say that Everything, Everything is a very sweet romance that I think anyone can connect with while watching. It’s definitely geared more towards young adult and sick-lit, but even so, a good number of people will have a hard time hating everything here.

This one is more of a no-brainer. Star Wars: The Last Jedi is part of a globally-known franchise that helped popularize the science fiction genre. Now, people have stated their hatred for the movie, as well as love, but you can’t help but say it is a beautiful film, and the entire movie is obviously sci-fi.

Normally, when I think of thriller, I think of horror, as they tend to go hand-in-hand. Often, I forget that they don’t need to. The actual definition of a thriller is – something that thrills, and this heart-pulsing series as a whole fits that description, but the first movie since Paul Walker died still managed to make something remarkable. The Fate of the Furious wins for best thriller.

This year, I’m taking a different route with horror, as no traditional horror really scared me in any real way. I have yet to see Jigsaw, but I doubt that would really win, anyway. The winner of this category is definitely The Girl with All the Gifts, which is more or less horror-adjacent, as it does deal with zombies, but in a completely original and different kind of way. I was a big fan of that one.

I know, I know, we’re not talking about a traditional superhero. If we were, it would be Spider-Man. Though, after seeing The Dark Tower, I had to realistically ask myself if this is considered a superhero movie, and I think it is. Yes, I still have to see Justice League in order to be completely sure, but I am happy with this choice. The Gunslinger is my superhero-of-the-year.

Most Anticipated Movie of 2018

This one’s more of a no-brainer. There are definitely a lot of anticipated movies coming out next year, but you have to admit Infinity War will be huge. Complicated and over-convoluted, possibly, but revolutionary in a similar way as the first Avengers movie.You can believe I’ll be first in line when that is released.

You may have noticed me putting down The Dark Tapes multiple times throughout this article as the worst of one genre or another, and that’s because it was ultimately a waste-of-time and waste-of-life, and I don’t normally say things so strong…but it sucked. Avoid this if at all possible.