There are two things I’ve said multiple times on this blog in the past.

So, when you have something that mixes both things into one, like found in Train to Busan, you have conflicting emotions. Especially because this is a movie that is highly revered as one of the better zombie films in recent history. So what’s it ultimately about?

Sok-woo, a father with not much time for his daughter, Soo-ahn, are boarding the KTX, a fast train that shall bring them from Seoul to Busan. But during their journey, the apocalypse begins, and most of the earth’s population become flesh craving zombies. While the KTX is shooting towards Busan, the passenger’s fight for their families and lives against the zombies – and each other. 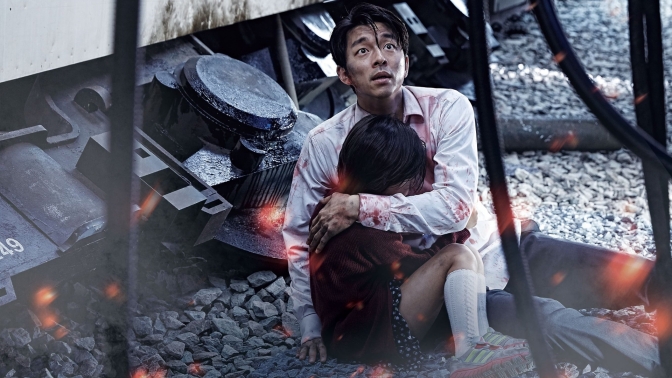 I’ll be the first to admit that this movie sucked me in almost immediately. While it had a little bit of a slower start, the pace quickly picked up and I was all in. It’s a rarity, but I was even verbally involved in the movie. Shouting equal cries of horror and pride as the roller coaster of emotions took me for a ride.

None of this would really be possible without a well-oiled machine, also known as filmmaking. The ins and outs of this movie were dealt with extremely well and it really does stand out among the best of the best in undead cinema, as it is gripping, chilling, exciting, claustrophobic, and all-around visually appealing.

Another main thing to state here is that the movie overall surprised me. I know it’s highly revered and is being made into an American movie as well, but there isn’t a lot of wiggle room for zombie films to stand out, and this really does, mostly due to the hard work everyone put out there.

Thankfully, there isn’t anything too serious for negative commentary. The whole subtitle thing ended up being more of a distraction than I was really prepared for, but that comes with the territory. The real issues really just comes down to technical errors. It does follow a basic and traditional zombie plot (try to escape and make your way to the unaffected zone). This makes for something unoriginal, technically speaking.